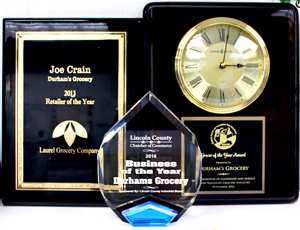 STANFORD – “Big enough to accommodate, small enough to appreciate.” It’s a motto that Lincoln County residents know well but this year grocers across the state paused to recognize the store and family that coined the phrase as Durham’s Grocery was named the 2016 Grocer of the Year.

It was almost 60 years ago when the Durham family opened a gas station in Stanford and after many years of growth, the store became what it is known as today, Durham’s grocery.

While the store has grown and changed during those 60 years, it’s ownership and operation has remained in the hands of one local family all along.

Joe and Robin Crain, along with their son Craig, have carried on the family tradition for the last 40 years as the owners and operators of the independent grocery store.

In November, the family traveled to the Talon Vineyards in Lexington to accept the 2016 Grocer of the Year award during the annual Kentucky Grocers and Convenience Stores Association (KGCSA) event. The award was presented by Lipari Foods.

While Durham’s Grocery has won multiple awards over the years, most recently the Lincoln County Chamber of Commerce’s Business of the Year, Robin Crain said she was almost in disbelief when the family received word about the state award.

“The very first day we got the email that told us we were chosen – we’ve been members of KG forever – I was reading it and I thought, ‘this has got to be a mistake,’” she said laughing. “Last year’s winner was Kroger.”

But competing with larger, chain grocery stores is something that Durham’s Grocery – and all local, independently-owned groceries today – have had to do for years.

“It takes partnerships with outstanding suppliers like as Lipari Foods and Laurel Grocery Company for independent grocers to survive and thrive in today’s crowded grocery marketplace,” said Joe Crain as he thanked KGCSA during the event.

Next year will mark 40 years for Joe and Robin Crain and as the couple begins to contemplate retirement, they said they will look to their son to help carry on the family tradition when the time comes.

“We’ve been grooming Craig to take over so we can finally retire,” Robin Crain said laughing.

He started working in his family’s grocery store in 1992 as a freshman in high school, helping out during the summer break.

Today, Craig Crain is helping guide Durham’s Grocery into the digital world as he continues to manage social media and digital marketing programs with plans to launch an online shopping program, according to the KGCSA release.

Craig Crain said like the rest of his family, he was very excited about the recent award.

Godbey retires after 36 years of nursing