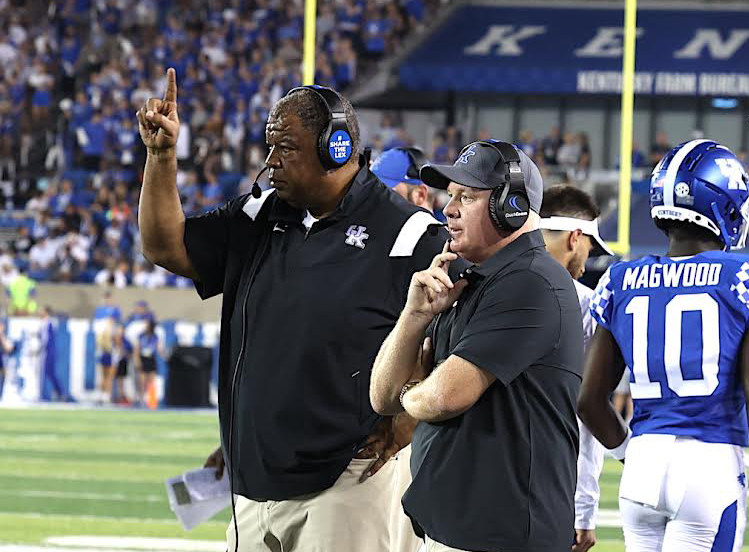 Kentucky coaches Mark Stoops (right) and Vince Marrow knew they had roster holes to fill and believe they did that by adding six players in the transfer portal. UK Athletics photo by Vicky Graff

High school recruiting is what both Mark Stoops and Vince Marrow insist will always be the foundation for the University of Kentucky football program. But that doesn’t mean they do not understand the importance of the transfer portal.

Now the head coach and recruiting coordinator have gone into the transfer portal to fill holes in the 2023 roster with six players who could all play key roles next season. Rivals.com has named Kentucky  a top five portal winner for the second time in three years.

“I appreciate our team, again, the way they handle things and accept guys coming in. They know there’s going to be great competition, but they want our team better. They do a good job of that transition with transfers,” Stoops said.

Obviously the headliner in the transfer portal this year is North Carolina State quarterback Devin Leary, who is expected to take over for Levis, a two-year starter who won 17 games.

“Much like Will, authentic. Not forced. He’s one of those guys, he’s a dude,” Stoops said. “Very much you could see him being a great fit. It happens easily.”

He ranked sixth in school history at North Carolina State with 6,807 passing yards and fourth in completion percentage (.602).

While Leary is the marquee name, the other five transfers also have a chance to play key roles just like the others have done in starting roles the last two years.

• Vanderbilt running back Ray Davis might be almost as important as Leary with the departure of Chris Rodriguez, UK’s leading rusher the last three seasons. He ran 232 times for 1,042 yards and five touchdowns last season to rank fourth in the SEC and 32nd nationally in rushing yards per game. He had five 100-yard rushing games, including one in a win over Kentucky.

“He kind of fits that mold of what we’ve been, how you need to have that tough, strong, physical guy. But we also wanted some dynamic play-makers, as well,” Stoops said. “It was very important with Ray. He’s another guy that obviously did very well against us. He’s a proven player in the SEC. It’s been a great addition. He’s got a very charismatic personality, very strong man on and off the field. We’re grateful to have him.

• Offensive tackle Marquez Cox of Northern Illinois also played well against UK last season. before suffering an injury that ended his season. He only allowed three sacks in over 1,000 snaps according to Pro Football Focus and has started 33 collegiate games.

“Just a big, athletic guy. Again, arguably one of the very talented tackles in there. We knew we needed a tackle. I think that was a real important get for us. You saw length, you saw athleticism. Another great addition,” Stoops said.

• Defensive back Jantzen Dunn of Ohio State was a priority recruit for UK and one of the state’s best high school players at South Warren High School. The four-star player played in four games last season. The 6-0, 185-pound Dunn ranks as a top 10 safety in the transfer portal but Stoops has a different position in mind for him.

“The plan is to play him at corner right now. I think that’s where we have an area of need. He’s a guy with very good top-end speed and length. Again, he’s a guy that’s versatile, though,” the UK head coach said.

• Defensive back JQ Hardaway played one season at Cincinnati and is rated as the ninth best overall player in the transfer portal by 247Sports. The Georgia native had a sack, four unassisted tackles and seven total tackles. He was a four-star recruit who played in the Under Armour All-American Game and had interest from Georgia, Tennessee, Ole Miss and others in high school.

“Another versatile guy we think can help us immediately in the secondary,” Stoops said.

• Glasgow High School product Tanner Bowles, a 300-pound offensive lineman transfer from Alabama, is another former four-star high school recruit that Kentucky wanted out of high school. He played in 19 games in four years at Alabama mainly on special teams. He had offers from Florida State, LSU, Tennessee, Oklahoma and many others in high school.

Bowles was a backup center/guard at Alabama but Stoops says UK plans to use him at guard.

“Again, a guy with experience, that’s been in a great program, from in-state. He’s a big, strong guy. He’s excited to come back home and play. We welcome him back and are excited about bringing him in,” Stoops said.

“Again, I think he kind of fits what we’ve been, a physical, tough guy. He’s been coached well, been in that program. We’re excited.”

Stoops and Marrow, UK’s recruiting coordinator, both openly talked about the need to add key “free agents” from the transfer portal to fill holes on the rest.

“I think we did a pretty solid job of what we were aiming for in the portal. I feel pretty good about that. It’s not to say you don’t want to take more,” Stoops laughed and said.

All six transfers are expected to enroll at UK in January and take part in spring practice.