Covid numbers down; flu, RSV up in Kentucky 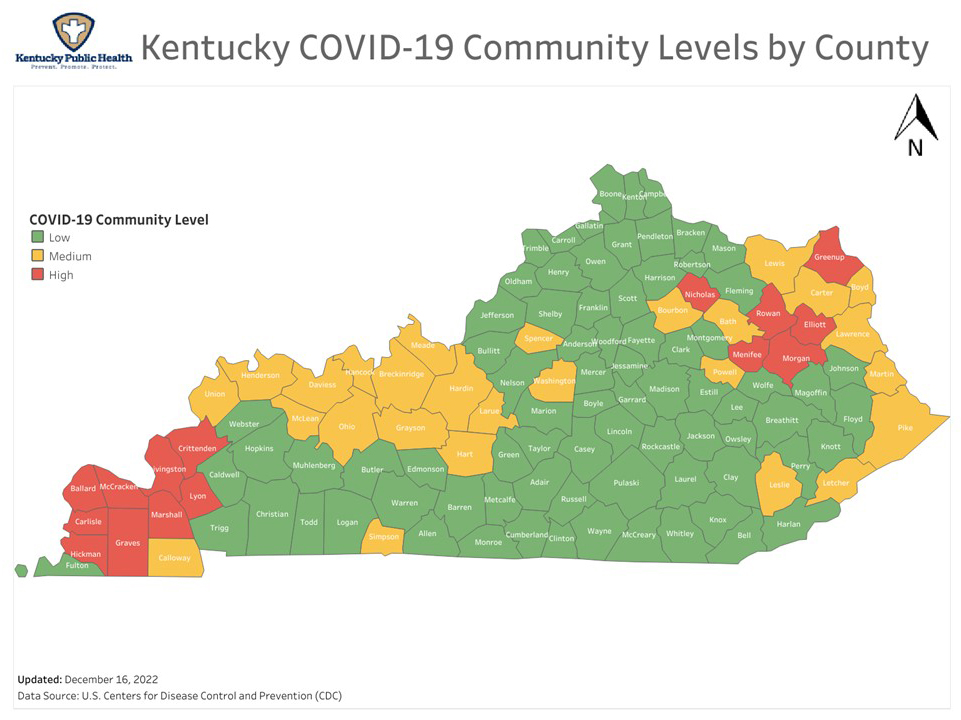 The federal risk map for Covid-19 in Kentucky got greener in the last week, but some Kentucky hospitals are filling up with increasing cases of influenza and respiratory syncytial virus.

The University of Kentucky‘s Chandler Hospital is at capacity and its Kentucky Children’s Hospital is close to full, as is Baptist Health in Richmond.

The hospitals also have Covid-19 patients, though hospitalizations for the disease in Kentucky have mostly declined in recent weeks. They have risen recently among Kentuckians under 18 and those 30 to 49.

The Centers for Disease Control and Prevention‘s latest map showing levels of Covid-19 risk by county has 78 green counties, indicating low risk, up from 64 last week. But the number of counties rated at high risk increased slightly, to 15 from 12 the week before and 10 the week before that.

The map is based on new cases and hospital data.

Gov. Andy Beshear on Monday encouraged Kentuckians to get vaccinated against the flu and reported six new, flu-related pediatric deaths, including three in the past week – none of whom had been vaccinated, according to the Kentucky Department for Public Health.

State health officials say this toll has already tied the prior record for the highest number of pediatric influenza deaths ever reported in Kentucky in a single flu season. That was set during the 2019-2020 flu season, when six children died of influenza.

Kentucky currently is reporting 29,341 laboratory-confirmed cases of flu, with the state flu activity level classified as “widespread” for the ninth consecutive week. Most reported cases of influenza have occurred in children.

“This current flu season is on track to be the worst in Kentucky in at least 10 years,” said Dr. Steven Stack, commissioner of the Department for Public Health. “The flu vaccine is the single best way to protect you and your loved ones against the flu and reduces the risk of becoming dangerously ill or spreading disease.”

Stack added, “Unfortunately, fewer than 40% of Kentucky children have received their flu shot this season. It is imperative that every Kentuckian take the essential steps to protect themselves, their loved ones and their communities.”

Though most influenza infections result in mild illness, serious symptoms such as difficulty or fast breathing, seizures, bluish lips or face, high fever (above 104 degrees), fever or cough that improves but then comes back or gets worse, dehydration (e.g., no urine for eight hours, dry mouth, no tears), or worsening of other medical conditions require medical attention.  Antiviral treatment of influenza is also recommended to reduce the severity of the illness.