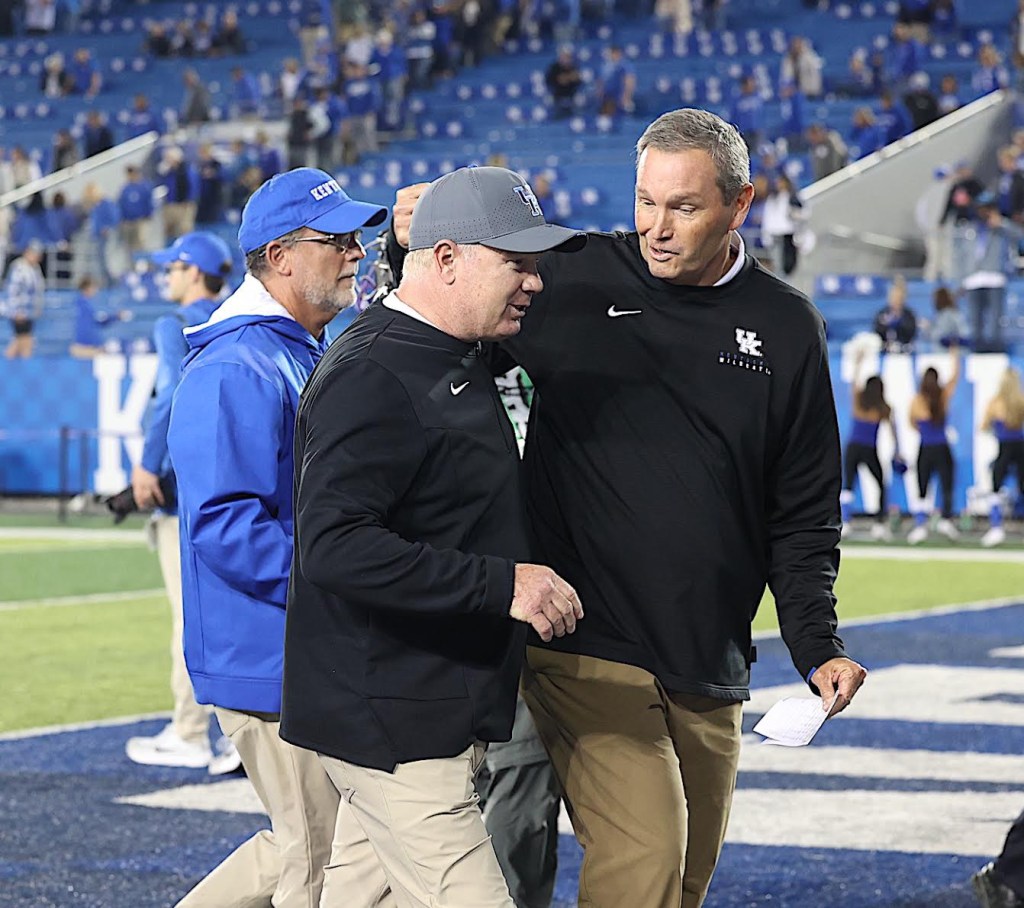 Despite a season filled with disappointments, UK Athletics Director Mitch Barnhart (right) has rewarded head football coach Mark Stoops (center) with a contract extension that places him among the highest-paid coaches in college football. UK Athletcs photo by Vicky Graff

However, only Alabama’s Nick Saban, Clemson’s Dabo Swinney, Georgia’s Kirby Smart and LSU’s Brian Kelly, along with Tucker, are the only college football coaches with higher annual salaries after a contract extension through the 2030 season that will pay Stoops $9 million annually starting in 2023.

Texas A&M coach Jimbo Fisher, who is having a forgettable season, has an annual salary in the $9 million range per year.

What makes Stoops’ contract extension/raise a bit perplexing is that after Saturday’s 16-6 loss to Georgia, UK has lost five of its last seven games. And Kentucky did not announce the deal that was actually signed by Stoops on Nov. 11, one day before the Cats lost at home to Vanderbilt.

News about the contract broke when Lexington Herald-Leader football writer Jon Hall found the information posted to UK’s Office of Legal Counsel website along with the rest of the athletic department contracts. A news release dated Nov. 18 was also posted on the website but the release was not sent to media members.

Stoops was already making about $6.35 million annually. HIs new deal includes just two performance bonuses — $100,000 any time his team participates in a non-New Year’s bowl and $300,000 if UK is in a New Year’s Six bowl game ,or any college football playoff game if the field expands. If UK makes the national semifinals he gets an additional $500,000 and $800,000 if Kentucky wins a title.

Again, knowing UK is 2-5 in the last seven games, those championship performance bonuses are not likely to happen.

One also has to wonder why any coach making about $9 million per year needs a performance bonus. Isn’t he being paid to win?

“We have been working on this for over a month and are glad to have it finalized,” Kentucky athletics director Mitch Barnhart said in the press release that was not sent to the media. “Continuity has become more and more important in today’s landscape, and make no mistake about it, the job that Coach Stoops has done is well known and highly regarded throughout the college football world.

“This extension also recognizes what Coach Stoops has done over the past decade, with unprecedented achievements in the history of Kentucky football, and reinforces his commitment to UK as we strive for continued success in the future.”

“As Mitch said, we’ve been working on this for a while, as I wanted to reaffirm my commitment. I’ve loved it here and am excited about our future,” Stoops said.

That future could be why Barnhart did what he did. Kentucky went into this season hoping to contend for the SEC East championship and was No. 7 nationally after a 4-0 start. Since then, the offense has not been good enough.

Speculation has started about other schools making offers to UK’s top players to entice them to enter the transfer portal to earn more NIL money and UK’s current recruiting class is barely in the top 50.

This commitment to Stoops for that long and that much money shows Barnhart is serious about wanting to maintain a high level program and is willing to pay to do it.