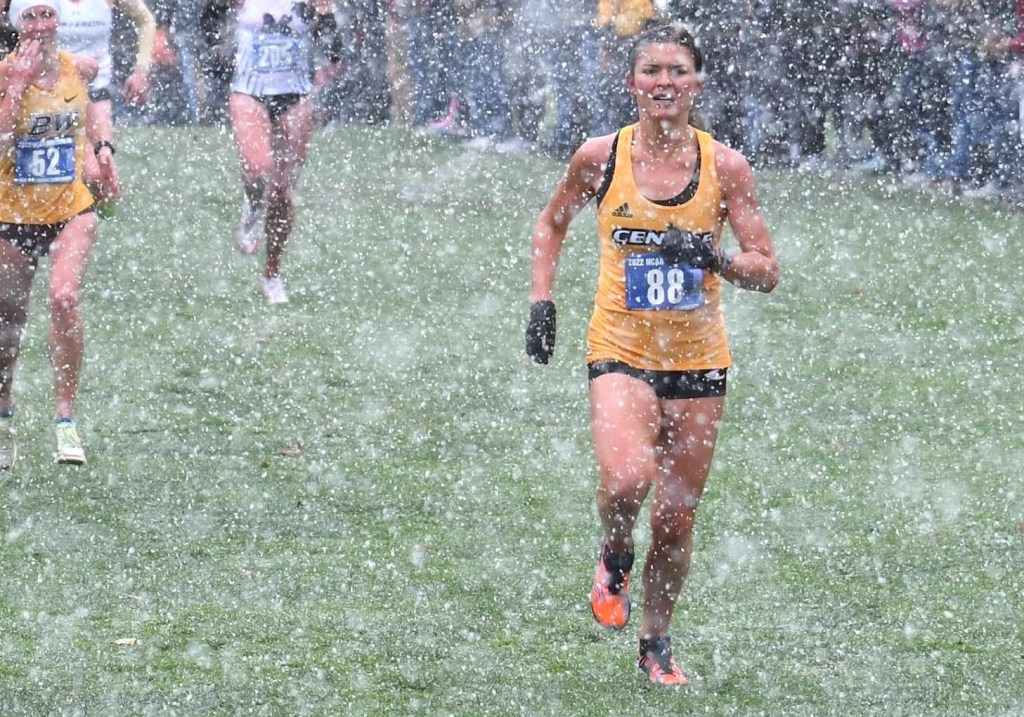 Meghan Owens didn’t think the weather conditions were anywhere close to ideal or maybe what she would need to run a personal best. Yet that is just what the Centre College senior did last weekend in cold, snowy conditions in Holland, Michigan, in the NCAA Division III Great Lakes Regional Championships.

Owens covered the 6K (3.7 miles) course in 21 minutes, 40.6 seconds to finish seventh overall and earn a berth in the NCAA Championships Saturday in Lansing, Michigan.

“It was quite chilly, especially since it was the first day the weather shifted. We had been training in 60- and 70-degree weather,” said Owens, a Mercer County High School graduate and daughter of Centre College track/cross country coach Lisa Owens.

She knew the temperature was going to drop but was not expecting the snow to pick up like it did once the race started.

“It was blowing right in our face. We were running kind of blind into a mixture of snow and sleet.  It took a little while to warm up,” Owens said.

Yet Owens was running the same race outfit she wears in the warm weather. Short pants, no sleeves, no hat. She did compromise and wear gloves during the run.

“Just about two minutes before the race I had four layers (of clothes) on. Right before the race I stripped down to my uniform,” Owens said. “Some teammates did wear hats, undershirts. I worried I would get too hot if I did that. I actually did heat up and didn’t want to take a chance of getting too hot.”

Her strategy worked. She had run a 22:55.1 in last year’s regional  and finished 32nd. Her best 6K time during the 2021 season was 22:19.1, her personal best until her impressive run in Michigan last weekend.

“We found out this fall that I had been dealing with iron (deficient) issues since the end of last cross country season,” Owens said. “We got it under control this fall and I broke my PR by 39 seconds, which made for a pretty big weekend.

“Health issues have been a big thing for me. From my sophomore to junior year, I didn’t see any real improvement in cross country or track. This was the first time in about two years that I had set a PR and really felt like myself again.”

She was also slowed by a stress fracture on the top of her foot last cross country season after stepping in a hole in the first meet of the season at Berea.

“I continued to train and run but it was not the same,” she said.

Now she’s hoping for another PR at nationals Saturday in Holland, Michigan.

The weather forecast is for a temperature around 29 degrees but no snow. That’s why Owens is thankful to be training in colder weather this week.

“Last week was a little bit of a shock to my system. I will be more prepared for the weather this week and that hopefully will be a game changer for me,” the Centre senior said.

Her only disappointment last weekend was that her team did not qualify for the national championship. The Colonels finished 11th in the 32-team field in the nation’s strongest region. Centre had been in the South Region until being switched to the stronger region in 2021. Injuries and illness took out the team’s second and third runners but sophomore Erin Haugh ran a 22:30.1 to finish 37th.

“We were really hopeful to qualify as a team but we weren’t at full strength. We still ran strong. I am the only one who will be graduating and they can make up for my loss and I think they will have a great opportunity to reach nationals  next year,” Owens said.

Owens wants to earn all-America status by finishing in the top 40 at nationals, a goal she feels is realistic.

“There are 10 regions (in the nation) and I had the 10th fastest time overall,” she said. “Out of the nine girls ahead of me, six were in my region. I can be right up there in the pack.”