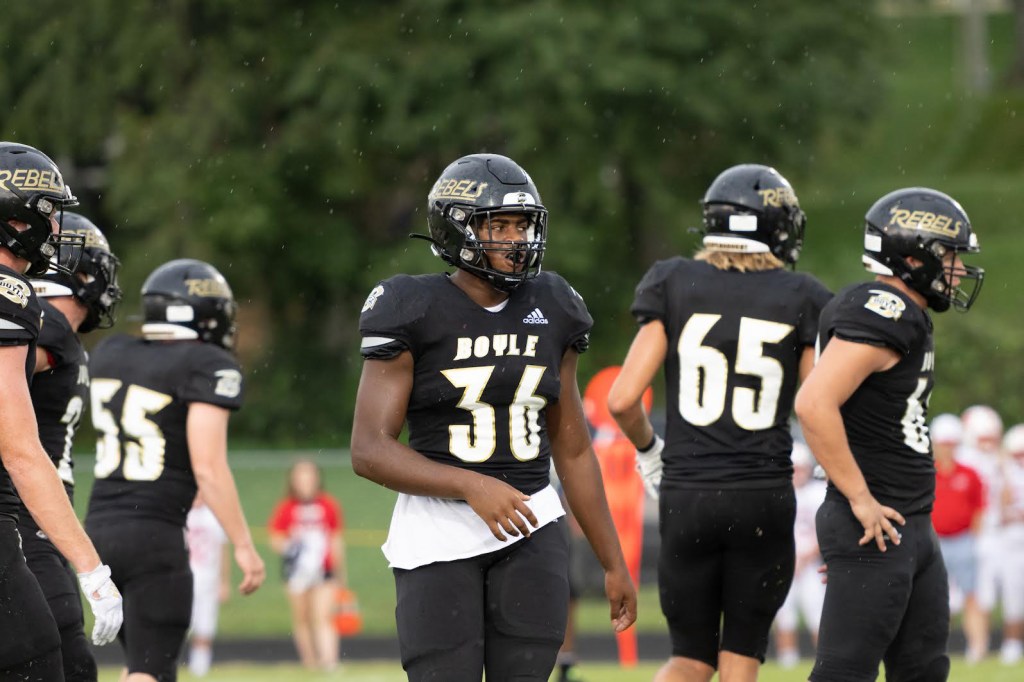 Kentucky commit Tommy Ziesmer had 61 tackles, including 27 solo stops, and 10 quarterback sacks last year for Class 4A state champion Boyle County. He’s having an even better season this year for the Rebels with 42 tackles, 12 tackles for loss, five quarterback sacks and two forced fumbles.

“Whatever he needs to do, he does it,” Boyle County coach Justin Haddix said. “He’s just special. If you look stat-wise, you have to remember he’s playing both ways this year. We have had to have him on the O-line this year and he’s done a great job there for us.”

Ziesmer verbally committed to Kentucky in May. He’s a 6-2, 225-pound defensive end who moves around a lot on defense this year to keep teams from scheming ways to block him.

“He’s got a better understanding of what to do this year,” Haddix said. “He’s so much more versatile. We play him at tackle and tight end on offense. We move him around on defense. He has played a lot of reps and just understands the game. He’s played in a state championship game every year and we hope he has one more trip to the championship this year.”

One of Ziesmer’s biggest improvements has been his intensity.

“His motor is running a lot better and a lot of that is just maturity. He sees the end (of his high school career). He has cherished playing here and in this culture,” Haddix said. “Kentucky is getting a really good player.”

Boyle will host unbeaten Frederick Douglass Friday night in one of the state’s top games. The Rebels won 34-7 last season when Ziesmer had five tackles, including one tackle for loss and one forced fumble.

Barnes has respect for UK’s Tshiebwe: Tennessee played Kentucky three times last season — and won twice — and coach Rick Barnes got a full understanding of everything that UK All-American Oscar Tshiebwe, the 2021-22 national player of the year, could do.

Barnes was still very complimentary of Tshiebwe during the SEC Media Days.

“He does a great job of fighting for his space on the floor. He knows where he wants the ball, and he is so quick, twitch from his shoulders getting the ball up over his head. He has terrific touch around the basket. If you get him position in there, he just knows how to work his body,” Barnes said.

“If you’re not ready early to defend him, he is going to put it on you. He is shooting the ball. He started making that little 15-, 17-foot jumper last year. But the biggest thing I would say is he is just so effective.

“You almost need two guys to block him out because, again, he has that great second and third jump, quick-twitch muscles to get up and get it. I love the fact that when he catches it, he gets it out of his hands real quick and makes it hard to defend.”

Boley says even on his visits he’s looking for things to learn that can help him improve his game but also the biggest purpose of the visit is to build a relationship with a head coach and offensive coordinator.

“I know offensive coordinators come and go at bigger schools because most are wanting to be head coaches. I just try to get as close as I can to the head coach because that is the relationship you really have to value,” Boley said.

“I know I am not going to fit into a quarterback heavy run offense. That’s not my game,” Boley said. “I can run but it is not my strength. Fortunately every SEC school is a pro-style offense and most Big Ten and ACC teams are like that, too.”

Boley says he almost always gets about 15 minutes with a head coach when he makes a college visit. He enjoyed talking with LSU coach Brian Kelly. Same with Tennessee coach Josh Heupel and he’s eager to talk with Michigan coach Jim Harbaugh.

“I know coaches like that will be there when I decide to go (to school). I am close to tons of head coaches. I really like Mark Stoops. I value my relationships with them a lot,” he said.

The high school playoffs start in November and Boley says he will focus on that and not college visits.

“I am a player before a recruit. I will focus more on my guys and team and the big run we are going to make in the playoffs,” Boley said.

Once football ends, he’s not sure about basketball. He averaged 13 points and 5.2 rebounds per game at LaRue County last season. His sister, Erin, is a former Kentucky Miss Basketball and his father, Scott, scored 2,129 points in his LaRue career.

“I might play but I might not. Hopefully I will not hurt my ankle again (playing football). If I tweak it again, I probably won’t play basketball,” Boley said. “But as of right now I plan to give it a shot. I like basketball but not as much as football.

“We call him Sundown,” the UK associate head coach said. “When he walks in, the sun goes down.”

He does have that kind of dominating physical presence that made him a four-star recruit and top 250 player nationally in his recruiting class.

Walker has made his presence felt in a “big” way for UK this season. Among all FBS defensive interior players with at least 100 pass rush snaps, Walker ranks second with a 9.41 pass rush grade with Pro Football Focus. Walker has 17 tackles in seven games.

Marrow said UK fans have not seen anything near the best from Walker yet.

“He is young but he is a big dude. As he keeps getting in game shape, this dude has a chance to do something really good,” Marrow said.

“You see Stew starting to play some other young and bringing them along,” Marrow said. “I am also impressed with the way he has Justin (Rogers) anchoring that defensive line. Those guys see what Deone is doing and it pushes them all.”

Howard named WNBA Rookie of the Year: Former Kentucky all-American Rhyne Howard averaged 16.2 points, 4.5 rebounds, 2.8 assists and 1.59 steals in 31.3 minutes in 34 games (all starts) in her first WNBA season for the Atlanta Dream to win rookie of the year honors. She led all WNBA rookies in points, assists, steals and minutes per game.

“I was so proud of Rhyne and what she has accomplished in the WNBA. She took the WNBA by storm, but we were not surprised,” Kentucky coach Kyra Elzy said at SEC Media Days. “If you listen to any of my press conferences, I kept saying she will be a better pro than a college athlete because they couldn’t load up on her.

Elzy said there is no replacing Howard, a “once-in-a-lifetime” player for any coach.

“I returned five core players that understand the standard and expectations at Kentucky, but they’ve also been in the trenches and had to produce in big games.”