Perry getting comfortable with recruiting process 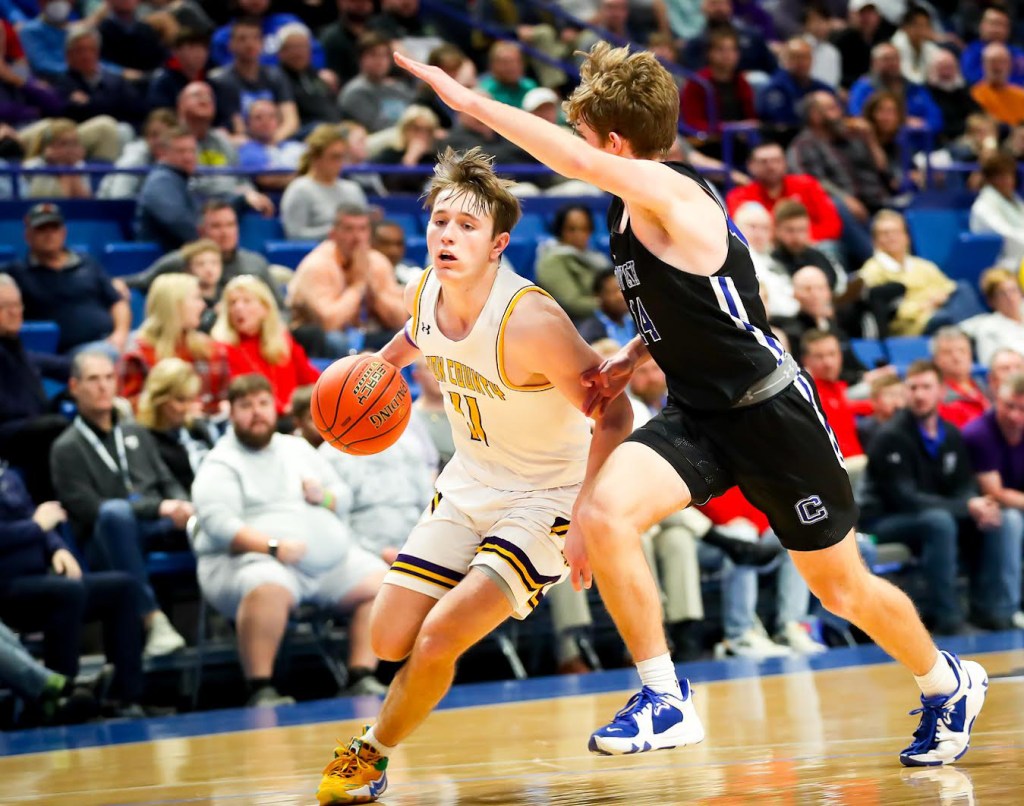 Travis Perry, who has a host of college scholarship offers, is becoming more comfortable with the recruiting process. Les Nicholson photo

As the college offers continue to increase, Lyon County junior guard Travis Perry says he has gotten more comfortable with the recruiting process.

“At the beginning it was kind of a shock that all this is really happening,” said Perry. “As a kid, you want to talk to coaches. Then you get a taste of it and it is kind of shocking and nerve-wracking.

“As the process goes along you start treasuring it more. You are grateful for it and humble and realize how blessed you are just getting to talk to all these great basketball minds.

You are hanging out with coaches and everybody on campus wants to talk to and take pictures with. Then you realize you can spend the day with them or call them whenever you want. People are so starstruck with coaches that I just get to meet. When I went to Michigan, people took pictures of us on the golf course.

“So I wouldn’t say I am totally comfortable with all this. I am just trying not to get caught up in it but definitely you enjoy it.”

Perry had been to a UK practice a week earlier. He took a visit to Vanderbilt before his family went to Gatlinburg for a few days. On the way home he texted Calipari to see if he could come watch practice.

“They are extremely athletic. That’s one thing you really notice when you watch practice. Daimion (Collins) is always above the rim. So are Oscar (Tshiebwe) and Jacob (Toppin). There are always 10 guys going full speed. It was pretty impressive,” Perry said

Perry said Calipari walked the players through several offensive sets and he was “in charge” of the operation.

“During the live drills, he was heading those up too,” Perry said. “The assistants were also helping out but it was clear Calipari was overseeing everything.”

Perry got his Vanderbilt scholarship offer during his visit and said the “academics” at Vandy are impressive.

“I take academics seriously. It’s also only about an hour and a half from home,” he said. “It was good to meet coach (Jerry) Stackhouse and see practice.”

Perry is also chasing the all-time scoring record in Kentucky of 4,337 points set by King Kelly Coleman in 1956. Perry has 3,189 points with two years remaining. He’s a gym rat but says recruiting has not been an issue with his basketball preparation.

He definitely wants to be ready for a Jan. 7 showdown with North Laurel — and UK commit Reed Sheppard — Jan. 7 at the Lexington Catholic Holiday Classic. North Laurel won the 13th Region last year.

“That’s definitely a big game for us. We should both be top 10 teams at worst,” Perry said. “It will be a good matchup playing against Reed and Ryan (Davidson).

“It definitely will be a game with a lot of attention. I imagine it will be a sold out game and should be a lot of fun. I know we will have a good crowd. Both of us are fast-paced teams who like to get up a lot of shots that people like to see. We both want to shoot 3’s and play fast break basketball.”

Oscar on the mend

The “minor” knee surgery that all-American Oscar Tshiebwe had last week is not expected to impact his play this season according to coach John Calipari.

Tshiebwe was the unanimous national player of the year last season when he was a double-double machine. His rebounding numbers were phenomenal and he showcased his versatility all season.

Yet assistant coach Chin Coleman says Tshiebwe has to be better this year than he was during his national player of the year season.

“That is the challenge. You can’t rest on what he did last year. It is a different year and different challenges,” Coleman said. “We have to see how much we can get out of him and how much more we can add value to his game.

“He could be a better overall player and yet his numbers not as great as they were last year.”

How would that work?

“We want to make him a better player and that does not mean averaging 20 (points) and 20 (rebounds). Make him a more efficient shooter, better ball handler. Make his assists to turnover ratio better,” Coleman said.

“There are things we can do to help him get better, make him even a better all-around player. And Oscar gets that. He wants to be better and knows it is about more than scoring when it comes to being a better player.”

Payne has no delusions

Louisville coach Kenny Payne has a unique approach to sharing his playing/coaching experiences in college and the NBA with his players.

“I can be delusional and be selfish and say, ‘Guys, you’re playing basketball; it’s just a game.’ That’s not reality,” the first-year Louisville head coach said during the ACC Media Days.

Payne said he was close at times to living with the pain of not always giving 150 percent but has been able to help people by putting others first.

“I want them to know that I care, I love them, and I’m coaching them out of love,” Payne said. “There has to be a fear of failure to know exactly what you’re facing in this world, because when it’s over, this college thing is over, this gets real.”