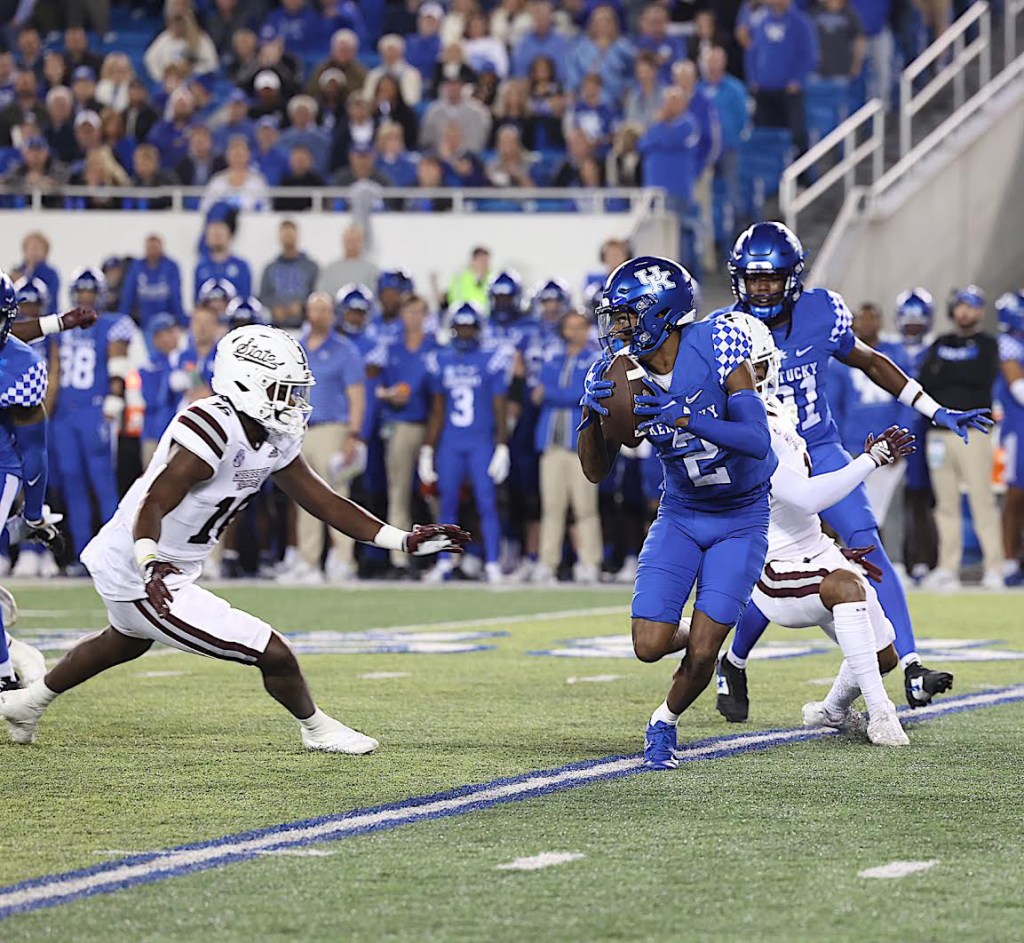 “Slowly but surely they put those big dudes up front, then came the running backs and quarterbacks good enough to win. But the one thing on his Christmas list was a breakaway wide receiver. As good as Lynn Bowden was, he was a different kind of receiver. Mark knew the game was changing and he needed guys who could make plays downfield.

“I remember more than one conversation with him talking about how he had to find guys who could stretch the defense and that would take Kentucky to a different level.”

“These two guys are going to be really good for a long time together,” Hart said. “I know they have helped make an impact on Will Levis’ future earning and draft potential because they have let him showcase what he can do.”

Brown had a career-high seven catches against Mississippi State — he also had an 80-yard punt return touchdown nullified by a penalty — and now has 24 catches for 350 yards and two scores this season. Key had 20 catches for 322 yards and three touchdowns.

John Schlarman obviously had a huge impact on the University of Kentucky football program first as a player and then as the offensive line coach who built the Big Blue Wall before his death at age 45 during the 2020 season after a two-year battle with cancer.

However, Schlarman’s legacy at Troy University where he coached from 2007-2012 is just as solid. Thanks to a gift from West Virginia coach Neal Brown and his wife, Brooke, the offensive line meeting room at Troy now has Schlarman’s name. Brown coached with Schlarman at Troy and then the two came to UK together to work for coach Mark Stoops when he got the Kentucky job.

Current Troy coach Jon Sumrall, a former UK player and defensive coach, noted that Schlarman impacted so many lives by the way he lived his life.

“He inspired me by his attitude, toughness and love for others, and his legacy will live on with Troy Football forever,” Sumrall said.

After being diagnosed with cholangiocarcinoma in the summer of 2018, Schlarman continued to coach and did not miss a game despite undergoing chemotherapy until the final two contests in 2020 before his passing.

Schlarman’s wife, LeeAnne Federspiel Schlarman, and children were in Troy for the naming ceremony. She said it was a “wonderful and emotional” weekend seeing friends and former players.

She thanked the Browns for their financial support and Sumrall and his wife, Ginny, for “making my kids feel a part of such a wonderful program.”

Quarterback Will Levis now has 37 touchdown passes — sixth most ever at UK — in 1½ seasons at Kentucky and has thrown for 4,462 yards — eighth  most in UK history.

He was  17 of 23 for 230 yards and one score in last week’s comeback win over Mississippi State — he was 9-for-9 on third down passes for 194 yards — despite briefly having to leave the game to have his left shoulder checked after taking a big hit. He had also missed the previous game with a foot injury.

“Will is just that type of guy that you want to go to war with. Everybody rallies around that guy,” offensive lineman Kenneth Horsey said. “To see Will take that hit and come running back out was inspirational. He is just that kind of guy. But he’s not just like on Saturday. He’s like that every day. He has a tough mindset.”

Kentucky coach Mark Stoops understood why trainers wanted an X-ray to make sure nothing was wrong with Levis.

“I knew if nothing was broken, that guy would be back,” Stoops said.

SEC Network analyst Jordan Rogers, a former SEC quarterback, called Levis a “warrior” for how he directs the UK offense knowing he’s going to get hit a lot.

“It wasn’t pretty but when they needed it, he made huge throws,” Rogers said after the game. “He proved a lot tonight.”

Now Kentucky has a week off before playing at unbeaten Tennessee, which knocked off Alabama 52-49 Saturday.

“If (NFL) scouts have any questions about Will Levis, they will get to see him after a bye week go to Knoxville and take on probably the nation’s No. 3 team. It will be a big opportunity for Levis but he sure has shown he’s ready for it,” SEC Network announcer Tom Hart said.

Levis certainly has a fan in former UK quarterback Tim Couch. He joined Hart and Rogers on the SEC Network during the Mississippi State win.

“I would take that guy over everyone in the country,” Couch, a former No. 1 overall NFL draft pick, said.