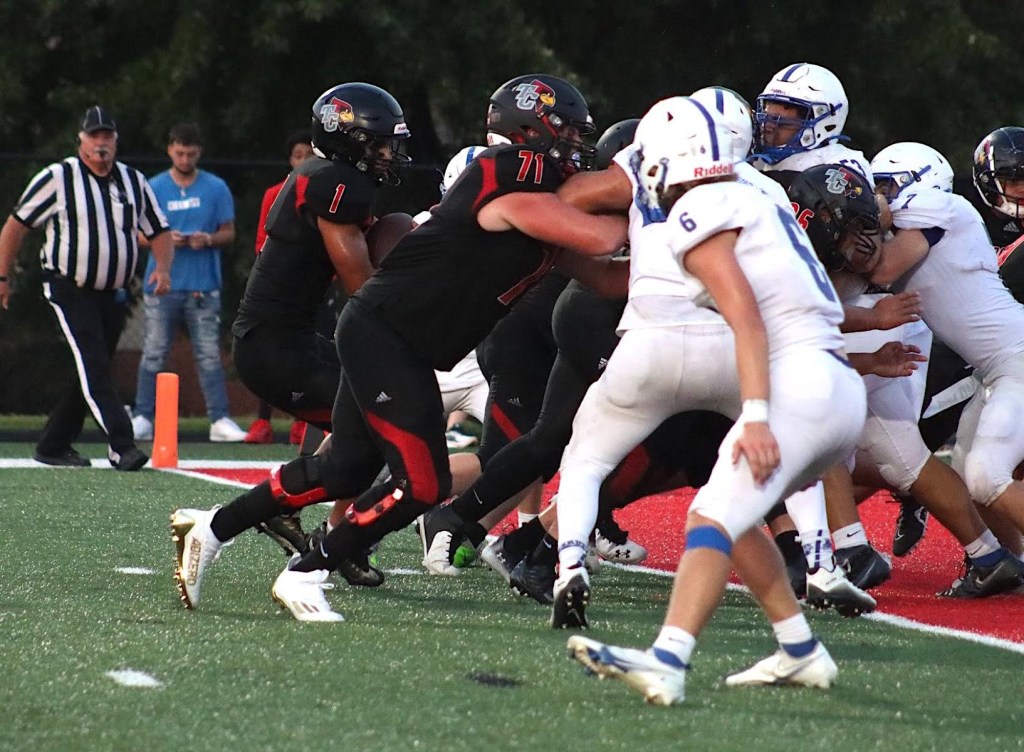 “Hayes is a big boy. He has the size you are looking for in college but he also moves very well,” said Marple. “He has so much potential. He plays aggressively and moves better than a lot of people even though he’s a lot bigger. College coaches see how much potential there is in him.”

The 6-5, 295-pound offensive tackle is one of the top junior prospects in Kentucky. He got a scholarship offer from Kentucky in June of 2021 and has also added offers from Michigan State, Tennessee, Purdue, Cincinnati, Baylor, Louisville and Eastern Kentucky. He’s also been visited in Campbellsville by Alabama offensive line coach Eric Wolford, the former UK assistant coach, and made an unofficial visit to Alabama.

“He is getting a lot of big-time attention. Alabama has rolled through here three times. Michigan has been here. Iowa, too. Kentucky obviously has been here. Somebody is here about every Friday,” Marple said.

“He gets off the ball so well for someone his size. He is very explosive when you are lined up straight up on him. He has that nasty mentality that can change the line of scrimmage and coaches love that.”

Johnson, who turned 18 in August, grew up a Kentucky fan. He played football through fifth grade and didn’t start again until Marple convinced him to play as a freshman.  He had played basketball through middle school and he knows that helped his football footwork. He says his AAU basketball coach made him a “better athlete” and everything clicked when he did start playing football again.

“I almost felt like he was picking on me about getting better all the time. I never understood it until after my first sophomore season and started getting a little bit of (college) attention,” Johnson said.

Wolford offered him a UK scholarship but after he left Kentucky for Alabama, Johnson did not hear from Kentucky. He got a text from Wolford inviting him to come to Alabama.

“I went down there and he said you have proved to me you can play. Now you need to prove it to (Alabama coach) Nick Saban. I went to work and just played football and they said they would be recruiting me,” Johnson said.

New Kentucky offensive line coach Zach Yenser had to get his bearings on campus before he reached out to Johnson. When Yenser came to Johnson’s school, the lineman was at Green River Lake turkey hunting.

“I rushed back to Campbellsville to meet him. I enjoy hunting and fishing. It gives me a chance to go and just reflect on everything,” Johnson said. “But I love football more than anything. I don’t know where I would be without football. There’s nothing else I would rather do than play football or turn on film and watch football. It’s nice to do other stuff just to think about something else but football is what I love.”

Johnson is a weight room warrior. He squatted 585 pounds as a sophomore and that helped intensify the interest college recruiters had. A Taylor assistant coach got him in touch with Chris Vaughn of Aspiration Fitness in Louisville. Among players trained by Vaughn are NFL receivers Wan’Dale Robinson and Rondale Moore. He also trains current UK freshman offensive lineman Kiyaunta Goodwin.

“I get to go one on one against some terrific players when I work out there,” Johnson said.