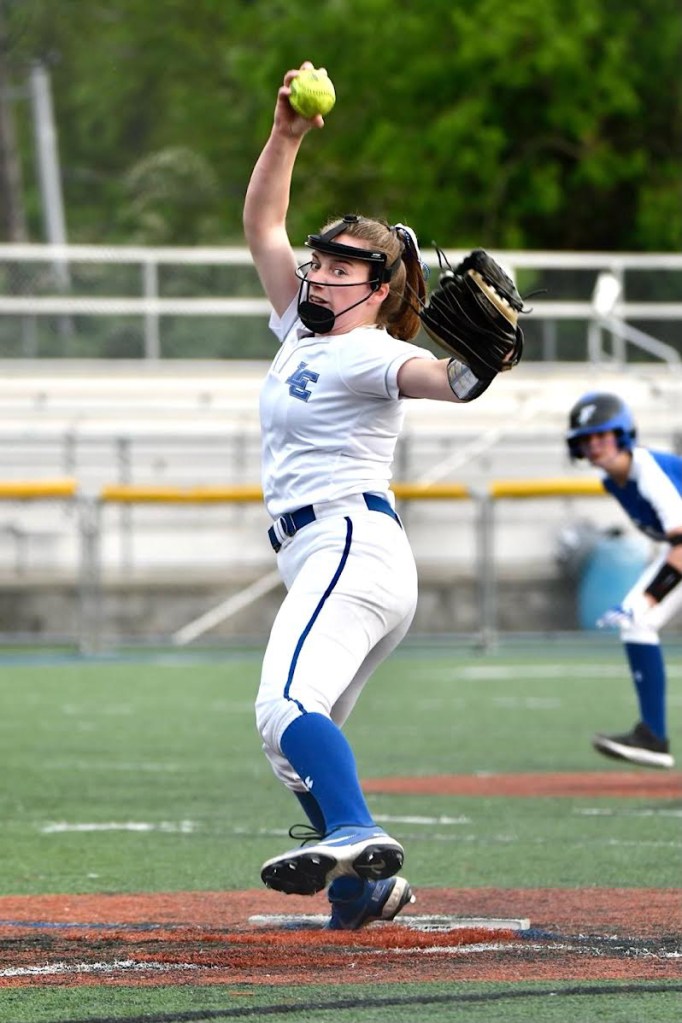 She has such a busy summer travel softball schedule that finding time to attend any college softball camps is not easy for Lexington Catholic sophomore Abby Hammond. However, she did make time to attend coach Rachel Lawson’s camp at Kentucky.

“I have been there plenty. I have had a great camp experience every time. I learn a ton from coach Lawson, her staff and her players,” said Hammond. “I would keep going back no matter what but I am glad they throw in new things each time to improve my game.”

Former Lexington Catholic player Ella Emmert — Hammond’s catcher her eighth-grade year — now plays for UK and that has enabled Hammond to get to know a lot of UK players. But Lawson already knows plenty about Hammond.

Perhaps her most amazing number is that she pitched all but three innings her team played in 2021.

“I don’t really get sore pitching that much. If I did, the coaches would take me out. They are always asking me how I am feeling and I am always honest,” the 5-8 Hammond said.

Her father is her personal pitching coach. He’s the coach of her Southern Force National summer team and an assistant coach at Lexington Catholic. The team played in Kansas City, Denver and Louisiana over the summer and included players from Alabama and Kentucky.

“In Kansas City we got top eight in our division. In Colorado, we won the elite division,” Hammond said. “We got second place in Louisiana. It was a very fun summer and we tried to play the best competition we could where college coaches would be watching.”

Her father started catching her when she was 7 years old. He calls her pitches at Lexington Catholic now.

“I am very used to the dynamic of him being my coach. He has an extensive knowledge of pitching. He’s just another brain to help me out,” Hammond said. “He does a lot of research and I am very thankful for his help. In the summer you play your game. You don’t really practice. You work on what you are good at and then get a chance to show off your skills.”

Hammond played baseball when she was 5 years old when she was “shopping around to find something she was good at.” She was about 7 when the team needed a pitcher and she thought she could do it and found out she was good at it. She sometimes goes to former UK pitcher Rachel Riley for pitching tips now.

What about her hitting? She credits the Lexington Catholic coaches for helping her learn to make more consistent contact and hit with more power.

“I don’t practice it as much as I do my pitching, but I really enjoy hitting, too,” Hammond said. “My parents once showed me a video of my swing at 8 years old. It looked awful. I didn’t hit a home run in a game until later than some other friends. My swing progressed a little later than others but is a lot better now.”

Hammond also plays point guard on the Lexington Catholic basketball team and averaged 4.5 points and 3.9 rebounds per game last season. She doesn’t practice basketball in the summer but enjoys her time playing during the season because it is not as pressurized as pitching.

“In basketball you have five girls on the court helping you out. If you make a minor mistake, others are there to help. It’s a nice change of pace from pitching,” she said. “Our coach is amazing, especially with me being a multi-sport athlete. I am very thankful for basketball. I don’t want to pursue basketball at the collegiate level but it keeps me in shape and is fun.”

Hammond won’t worry about trying to top her Gatorade Player of the Year statistics in 2023. Instead, she wants to win a state championship. Catholic lost to Ballard in last year’s state title game.

“I would like to win a state championship before I graduate,” Hammond said. “You can’t do it on your own in a team sport and we preach at Catholic about playing for each other. Winning state has been my dream since I was 10 years old.”

College coaches still cannot contact Hammond directly this year but she knows opportunities will be there for her.

“I know college coaches will eventually be reaching out but that’s in the future. Right now I just want to enjoy our season and hopefully win a state championship,” Hammond said.

“Valerie says a lot of the 1982 UK team will be here,” Souder said. “Former Laurel County coach Roy Bowling will also be in attendance. Unfortunately, Lisa’s mom passed away not long ago but some other family members will also be here.”

Souder plans on having three games with South Laurel playing the final game at 5 p.m. Pulaski County is a potential opponent for South Laurel.

“We wanted to play a little earlier than normal so the ceremony before the game and reception after the game would not be so late,” Souder said.

Patty Jo Hedges Ward was on the 1982 UK team that won the SEC championship along with Still and Collins. She plans to be in London. Stacey Reed Sheppard, another former UK player from Laurel County, will attend if her son, UK commit Reed Sheppard of North Laurel, does not have a game.

Garland and Collins are both in the Kentucky Basketball Hall of Fame. Collins was also Kentucky’s Miss Basketball in 1980 — the only Laurel County player ever to earn that honor.

Collins helped Laurel County win three straight state championships from 1977 to 1979. She hit two free throws in the final seconds as a freshman in 1977 to clinch the title.

“We think this is a very special way to honor a special player and have already had teams reach out to me about playing in the event next year,” Souder said. “We hope a lot of people come.”