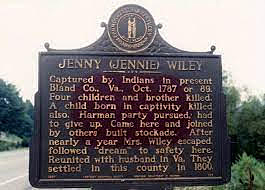 Jenny Wiley, pregnant and with a 15-month-old babe in arms, found it difficult to keep up with the band of Indians who captured her after killing her brother and three of her children on October 1, 1789. The Indians thought of killing Jenny and her baby because they were slowing their movement.

The baby continued to delay their travel and made too much noise so they killed the baby. Jenny was heartbroken. She thought it was more than she could take.

They spared Jenny as she may be useful in their village or of value trading her in Detroit for needed items. Jenny was devastated but she knew that her only chance of survival was to keep her actions and emotions in check.

Soon thereafter two Indians held each of her arms as they swam across the Tug Fork of the Big Sandy River. Jenny was thoroughly soaked and cold after arriving on the opposite shore. Although the Indians paused to rest under a cliff until day-break they didn’t build a fire for fear of detection. Until then they followed a common path but then they traveled through rough terrain and made every effort not to leave a trace.

Jenny was totally exhausted and dispirited. She was on the verge of mental and physical exhaustion. Soon they finally stopped to rest and eat. This time when the Indians offered her food (dried venison) she took it and ate. Prior to this she had no desire to eat and refused food when it was offered. Her unborn child started to become active and this became a growing concern to her.

“Tell ’bout old Skygusty,” the old Indian said to Jenny when they paused to eat. He could tell that she didn’t understand. “Tell ’bout little devil with big nose.”

Jenny then knew they were talking about the Indian’s old nemesis, Mathias (Tice) Harman. Although Harman was small in stature, standing only a little over 5 feet in height and weighing about 135 pounds, he fought the Indians tooth and nail for years.

“Harman was in his cabin and he’ll be on our tail with a large rescue party soon,” Jenny said. It angered the older Indian.

When they arrived at the Big Sandy River below the present site of Louisa, Kentucky, the two Indians again took Jenny’s arms and the group swam across.

After traveling nine days they reached the Ohio River where the Indians chanted “Oh-hi-yo, Oh-hi-yo.”

The Ohio River was at flood stage so they hiked to the Little Sandy River and ascended it before camping at the Cherokee Fork of Big Blaine Creek.

The Indians directed Jenny to a cave which became her home for several nights and where on a cold night she gave birth to her baby. Soon she was expected to perform various chores around the camp.

Over the next several weeks Jenny worked in the Indian village and became accustomed to their lifestyle and to what the Indians expected of her. Jenny’s trials were not over, however. Her captors informed her that her baby would have to undergo a “trial by water.”

After two or three months, they took the baby boy and headed for a large pool in a nearby stream. Jenny anxiously was in close pursuit. The baby, just a few months old, was placed on a crude narrow raft and pushed out into the water. If the baby was still the Indians would adopt it and raise it to be a warrior. If the infant cried or thrashed about in the water he would be put to death.

Jenny was livid. Unable to control herself she rushed, splashing into the pond, grabbed her baby and attempted to run down the creek bank. It was useless as two of the warriors quickly overtook her and took her baby. They returned to the site where the others waited.

The Indians were infuriated over the intervention and resumed the trial by tossing the infant into the cold water. The baby surfaced with a cough and cried out weakly before a warrior grabbed the baby boy and dashed him into a tree, killing him just as the old Cherokee had done earlier with Jenny’s 15-month-old child.

Jenny was devastated. As she lay sleepless that night she couldn’t help thinking back to her peaceful childhood days at home with her mother, Dad and siblings when they lived in Pennsylvania where she was born. She was so excited with her family moving westward but it brought so much grief. She had lost her entire family. Her intention to escape, come what may, was reenforced by the hideous loss of her baby.

Although she was imprisoned against her will under the most trying circumstances it reenforced her state of mind that she might eventually get a chance to escape.

She often thought about Mary Ingles, who was kidnapped similarly by Indians 34 years earlier. Ingles became a hero among the early pioneers after she escaped and survived in the wilds for several months while searching for and eventually finding her way back to a pioneer settlement.

“Oh, if only I get a chance to escape. I’ll take the first opportunity,” Jenny thought.

She thought that surely, some day in some way she would be rescued or find some means to get away. Copyright 2022 Jadon Gibson Editor’s note: Jenny’s husband Tom returns home next week and learns his wife had been taken. If you like Jadon’s stories tell others as they might like them too. Jadon Gibson is a freelance writer from Harrogate. Don’t miss a single issue. Thanks to Lincoln Memorial University, Alice Lloyd College and the Museum of Appalachia for their assistance.