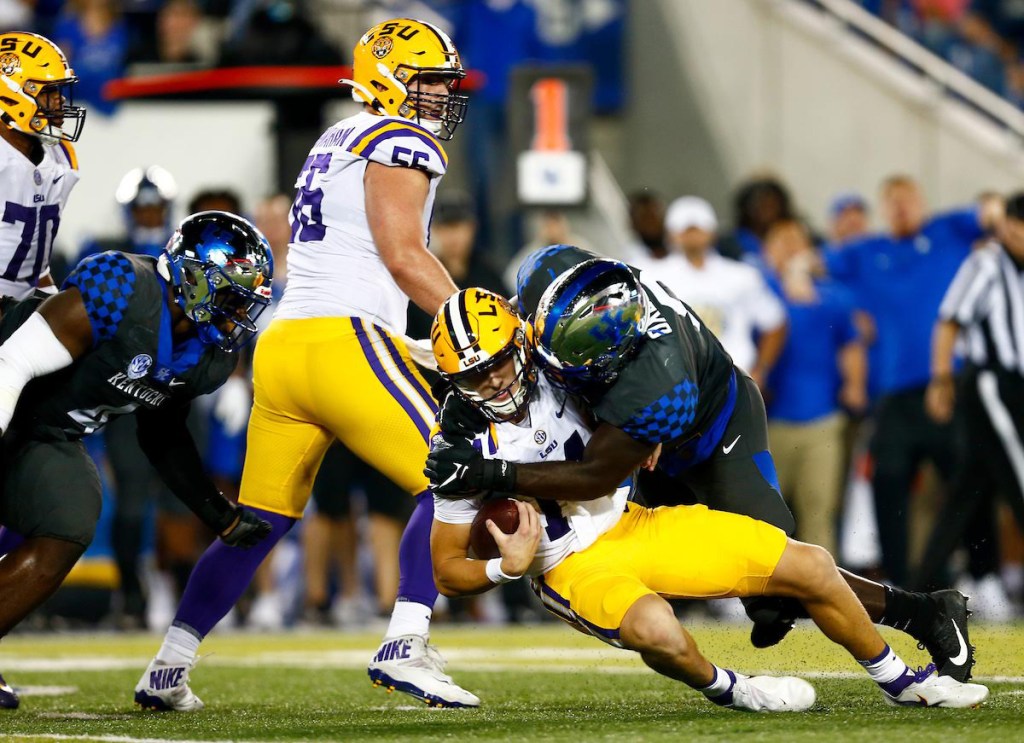 Sometimes bigger is not always better.

Kentucky junior defensive lineman Octavious Oxendine felt like he had to gain weight when he got to Kentucky and went into last season weighing close to 320 pounds. Now he’s down to about 281 pounds and wants to play at that weight this season.

“I tried to slim down. I wanted to be quicker on my feet to move laterally and stuff like that. Be able to be faster than those big guys I am going against,” the former North Hardin standout said.

He started three of UK’s first six games last season and had 15 tackles, two quarterback sacks and one quarterback hurry. However, Oxendine suffered a season-ending knee injury against LSU. He lost weight during his rehab but decided he would like to stay at a lighter weight.

He gave up pasta, his favorite food, and now feels faster and fresher than ever.

“I figured out after I got here that I had to have strength and speed. I lost the weight and hopefully will have more speed and keep the same strength because of the way I trained and lost the weight,” Oxendine said. “I hope I can put it all together this year.”

“I think it was an all-around thing. Coach White had asked me if I felt faster at the weight I was at when I was dropping weight during rehab. I told him I did and he told me it was fine to play there and after that I just kept gradually building off that,” Oxendine said.

White likes what he has seen, too.

“He’s got to be the leader in that (defensive line) group. He’s trained so hard to get back to the point he was before he got injured. It’s early, but he looks explosive,” White said at UK’s Media Day. “Yes, his weight is down, but he looks stronger. He’s looser than he’s ever been in the past. He’s brimming with confidence.”

White said he felt Oxendine could play any defensive line position. He even suggested he could potentially play linebacker in certain situations, a possibility Oxendine embraced.

“I think I could go back there. I could play linebacker if he needed me,” Oxendine, who has played in only nine games in two years, said.

The defensive lineman could tell I seemed a bit skeptical, especially about him dropping into pass coverage.

“You really don’t think I’ve got it?” he asked. “I could jump in the curl flats over there. I got it. I could do that (pass coverage) if that’s what I needed to do.”

He’s even more confident he can be the leader White and Stewart want him to be for a defensive line that lost its inspirational leader in Josh Paschal, a third-round draft pick of the Detroit Lions. Oxendine is wise enough to know, though, that leadership needs to come from more than just him.

“You can tell the guys at this age but are they going to come and do it with you or not. You have got to have that buy-in and it is all coming together for us,” Oxendine said. “In my mind how good we can be as a team starts up front and we have to be great.”

Oxendine says no one player has impressed him with a big improvement. Instead, he believes all his teammates are better.

“I ain’t going to lie. I would say all the guys. Not because they were bad but I have seen a lot of them mature. They were a young group of guys but they all bought in to come in and get the extra work and get to where we want to be,” the junior said.

Oxendine had to put in plenty of extra room during rehab to get where he is going into this season. He’s back 100 percent physically but admits rehab was hard mentally.

“It was a process that anybody who goes through rehab can tell you it is a lonely situation you go through but you do a lot of growing and maturing. I feel I matured a lot and became a better person but it was hard,” he said. “It is waking up in the morning and knowing you were just playing football a few weeks ago and now you are walking on crutches and can’t do a lot of stuff you could do before.

“It like getting in your mind you have to do this. I tell guys going through rehab now that you know you want to play football again, so you have got to do it. You can’t just stop. You have to do it and that’s what I did.”