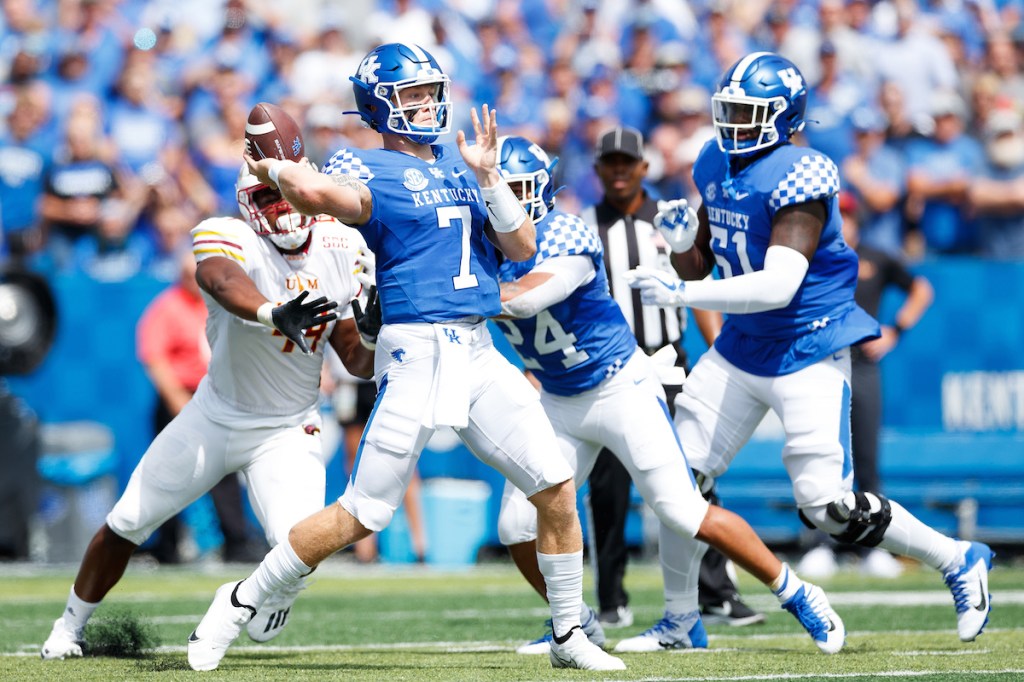 Tim Couch couldn’t help but smile last season when he watched what offensive coordinator did with the Kentucky offense. He put the passing attack back into Kentucky football and quarterback Will Levis and receiver Wan’Dale Robinson made one think back to the days almost 25 years ago when Couch was throwing to Craig Yeast and others.

Couch started his UK career under Bill Curry but developed into the No. 1 overall pick in the NFL draft when Hal Mumme took over the program and brought in the Air Raid offense that reenergized Kentucky football.

“Certainly I feel quite a bit of pride in that. I was with Hal recently and we talked about how we got things started. Kentucky football was not good when Hal came. He got fans involved because of his offense and put the addition on the stadium,” Couch said. “It was a fun brand of football for players and fans.

“It really changed football across the nation. Most colleges run some type of Air Raid offense. It made its way to the NFL. It just had a huge impact on football and I am proud I was part of it.”

“What Mark has done at Kentucky is phenomenal. I was not sure someone could sustain that success year after year . I could not be happier for him and the fan base loves him. Now add in this passing attack and it could really get to be even more fun,” Couch said.

Couch understands the hype for Levis now that he’s being projected as a first-round NFL draft pick in 2023 and potentially the No. 1 overall pick. He’s also being mentioned as a Heisman Trophy candidate. However, Couch says Levis has one advantage he did not — a better overall team.

“They are more talented overall than we were. The offensive line, running backs, defense are all good,” Couch said. “They have a ton of talent on both sides of the ball. Will surely feels like it is not all on him. He has a great running game and great defense to lean on.

“He does not have to score every time the offense has the ball for Kentucky to win. He can just play his game and make plays when they are there. That makes your job so much easier.”

Couch says Levis has to make sure he motivates teammates to put in extra work this summer on their own to be fully prepared for the 2022 season.

“I would organize offseason workouts. I would post notes through the (football) building about throwing 7-on-7 at this time on this day. I would encourage everyone to show up unless they had another responsibility at that time but made sure they all knew how important it was to be there,” Couch said.

“We would have huge turnouts for the workouts. Almost all the defensive backs, running backs, receivers would show up. It’s just something that a quarterback has to take charge of and make sure it gets done and I have no doubt Will is going to do that.”

Couch also is confident Kentucky is going to do just fine coming off its second 10-win season in the last four years.

“I love the system they have. You can win year in, year out with it,” Couch said. “They want a NFL style approach to offense now. In the past they have kept games close and been able to pull them out and win a lot of games that way.

“All you can ask for is to have a chance in the fourth quarter to win. That’s how Stoops built the team with a good defense and offense that was about the running game. It has worked great for them but now they have added a NFL style passing game and big-time quarterback to make it even better.”