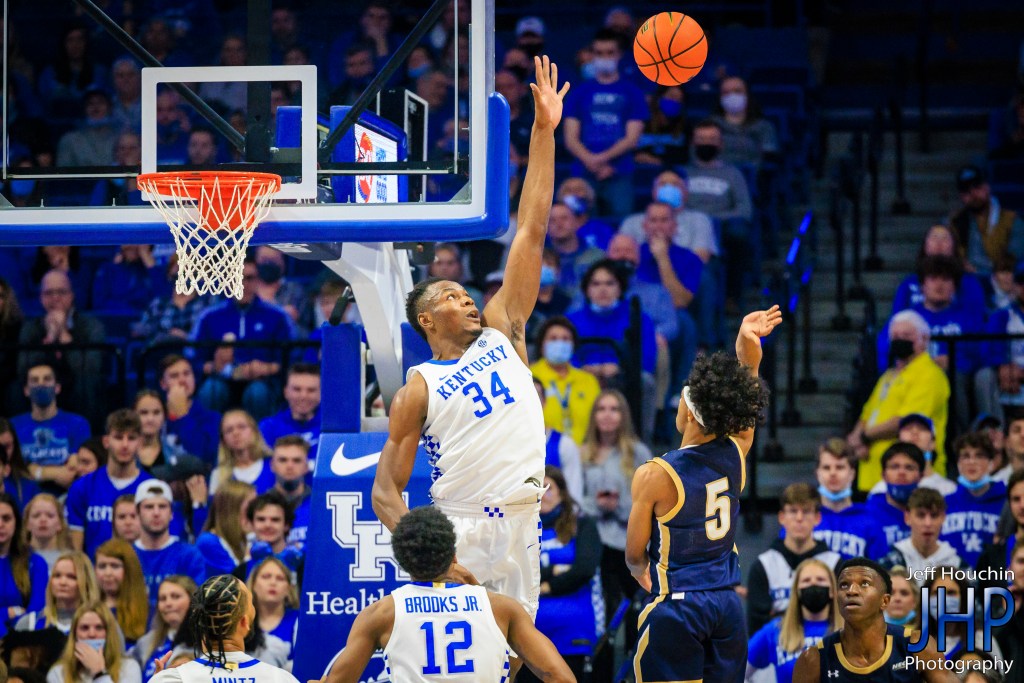 John Calipari says Oscar Tshiebwe is an “authentic” person who evaluated correct information before making his decision about his future. (Jeff Houchin Photo)

Before Oscar Tshiebwe officially announced he was staying at Kentucky for another season he had some telling him he should go ahead and start his professional career after sweeping national player of the year honors.

“There were people in his ear trying to get him to leave anyway up until the end. He did a video, according to our people, the week before that (his decision) and said I’m coming back and another video that said I was leaving in case he changed his mind,” Kentucky coach John Calipari said. “So it was him saying, ‘I want to come back, win a championship, and be a lottery pick.’ And I said, ‘Alright, I like those two things. Let’s go for ‘em.’”

Calipari admitted he had doubts about whether Tshiebwe would return until he went through the NBA evaluation process.

“When I met with him he said, ‘Coach, I had more fun playing basketball than I’ve had ever. And I got better.’ So he says, ‘Unfinished business.’ The one thing he said, ‘I gotta pray to God,’” Calipari said.

“The kid is authentic now. Just authentic. So I knew what he was saying. I said, ‘When you pray, you can’t say, ‘God, please influence me to leave. That’s not a good prayer.’

“And so when he hit me back, he said, ‘I asked God why could I win every award and do all that I did and not be a (NBA Draft) lottery pick and the answer I got back is that you have unfinished business.’ Could you imagine?”

Calipari said he didn’t like to be the one sharing NBA information and telling players what to do when they are weighing their future options. Instead, he wants to funnel information to them.

“He was projected by the NBA, the 30 NBA GMs, who evaluate the players that put their name in. The NBA gives you the information. Whatever it says, they’re 97 percent correct,” Calipari said.

“So when someone says, ‘Yeah, I don’t care what that thing says, you’re going to be the 20th pick of the draft.’ It’s just not true. In the NBA, if you’re a second round draft pick, 85 percent aren’t making it. The average length career of a second rounder is 100 games. So the point is, go in that league when you can get yourself in the first round.

“And the better the positioning, you have a better chance of playing and doing stuff if you’re picked early in the draft. If you’re picked late, you better be lucky like Tyrese (Maxey) and Immanuel (Quickley) where they should have taken you 12 or 11 or 10 or 9 and you go 20, look at those two. Our kids go into that league when they’re ready to play and ready to fight.”

Tshiebwe understands that but also knows his national player of the year status will put a target on him next season.

“I like when I am the target for a lot of people. I like when people are coming for me,” Tshiebwe said. “I study a lot.”

He said he often lays in bed watching videos of future opponents to see how they might try to stop him.

“Everybody saying, ‘I am going against Oscar. I got to destroy him.’ I think I will be good,” the UK junior said. “God has blessed me with this best model.”