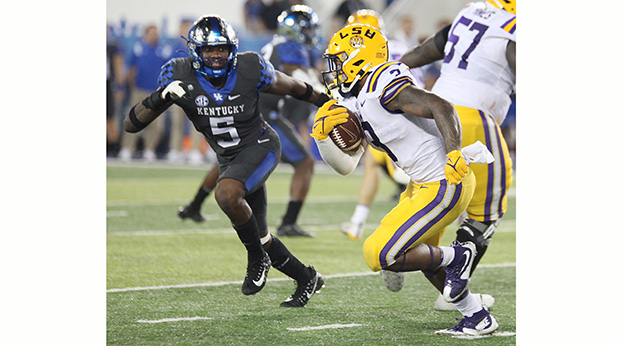 Senior linebacker DeAndre Square understood why linebackers coach Jon Sumrall could not pass on the opportunity to be head coach at Troy University.

“He’s Big Blue all the way down. He would love to stay here for as long as he can, but the opportunity that he had was just something he couldn’t pass up on,” Square said. “When he called me – because he called me before the news got out – we had a nice conversation and

I couldn’t do anything but smile for the guy, because, I mean, he’s helped everybody that he’s come across in that facility here at UK. He helped all the linebackers.”

Square developed into one of the SEC’s leading tacklers the last two years and admits Sumrall has been “important” in his development.

“He’s always been there for me. I was nothing but happy (about his new job) because that’s a big-time job,” Square said. “He’s a very exciting guy. He’s like the tone setter. He’s always got energy and juice no matter what day it is, game day, practice, film day. He’s always got juice.

Sumrall could have said goodbye to his players and concentrated only on his new job. Instead, he wanted to coach in the Citrus Bowl to help UK win a 10th game.

“We’re just going to enjoy the last time he’d be our coach. So every chance we get, every meeting, every practice, I know that me and the other linebackers are going to go hard for him, because we know how much this last game is going to mean to him,” Square said.

“He wouldn’t want to leave this university. But he got a great opportunity, that’s the only reason. We’re going to play very hard for him because we know how much it means to him.”