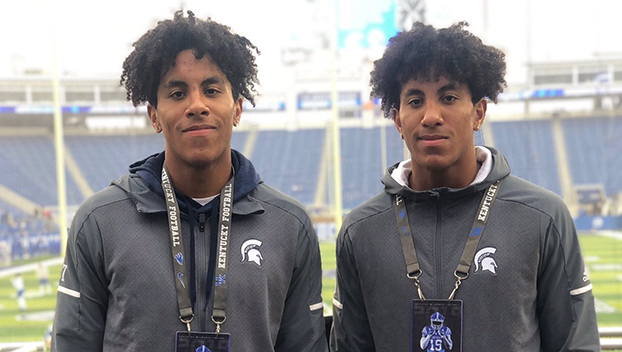 Valerie Wade needed assurances from coach Mark Stoops that he would be at UK to coach her twins Destin, left, and Keaten Wade and got it.

As speculation continued to spread about Kentucky coach Mark Stoops being a possible candidate at several major schools with job openings, Valerie Wade could not help worrying a bit.

Her twin sons — linebacker/running back Keaten and quarterback Destin Wade of Summit High School outside Nashville — were both UK commits. The two Tennessee stars both had numerous offers, including Tennessee, but were sold on Stoops’ program.

Valerie Wade decided to ask Stoops directly what was happening well before UK’s season ended and news broke that Stoops had agreed to a new contract.

“I just reached out to him and told him, ‘The boys really need you as their coach.’ He quickly assured me he was going to be there.

He said not to worry about it because he needed them to,” she said.

“He just came right out and told me. I was absolutely surprised with how honest he was and was really impressed with him getting back to this mom so quickly to reassure me he would be at Kentucky. It spoke highly of his character and his commitment to the program.

“He could have danced around it. He could have minced words and not be so definitive. Not every coach would put himself on the line like that.”

She said her sons never worried a lot about Stoops leaving because they were more focused on playing in the Tennessee Class 6A state championship game.

“I was more tuned to social media and message boards than them to see all the speculation and rumors,” Valerie Wade said.

“People were coming up to me every day asking if Mark Stoops was leaving. It was really stressful for me because the boys were in the playoffs and I just didn’t need any of that extra stress. When I would hear the speculation, my heart would skip a beat.

“But I am a direct person. I thought I was just going to put it out there to remind him how much we needed him and he more than reassured me he was staying.”

Once Kentucky announced Stoops had agreed to an amended contract, Valerie Wade felt even better about her sons going to Kentucky. She’s seen the upheaval in the college football coaching ranks with coaches leaving on their own, other coaches being fired or some programs going the wrong direction.

“All of that chaos just absolutely solidified that we made the right decision about Kentucky. We always felt that way, but this just validated that even more,” she said. “I understand using the leverage he had to get more for the program and his staff. I really think Kentucky is poised to explode to national prominence.”

Stoops had impressed her in September when they visited for the Florida game. Valerie Wade was surprised not only UK assistant coaches but even Stoops met with them before the game.

“We stopped at the hotel where they were at. They were preparing for what at that point was the biggest game of the season and yet coach Stoops and his staff took time to chit-chat with a couple of recruits,” Valerie Wade said. “They did not have to do that.

Stoops did not have to do that. He could just have hid and got in the zone for the game and not made small talk with us. But he did and that really impressed this mother a lot.”

Her sons certainly both had memorable seasons. They are two of the three finalists for Mr. Football in Class 6A, Tennessee’s largest classification.

“I was blown away that they were both semifinalists and to have them both as finalists, what a blessing that is,” she said. “If either one wins, it will be so special.”

Keaten Wade has been invited to the All-American Bowl Jan. 9 in San Antonio.

Destin Wade finished the year having rushed for 2,309 yards and 31 scores and completed 79 of 136 passes for 1,436 yards and 18 scores. Keaten Wade has rushed for 618 yards and seven scores and had nine catches for 152 yards and three scores.