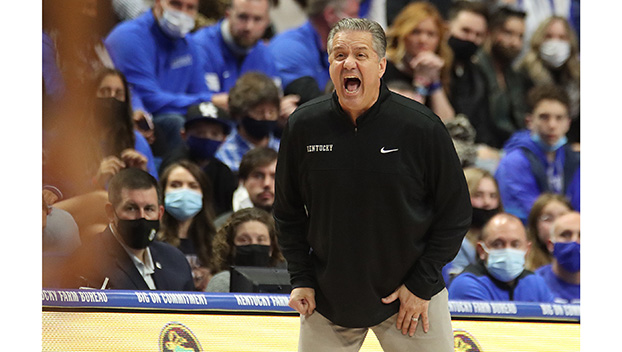 During the COVID-19 impacted 2020-21 season it certainly seemed at times like there was a huge disconnect between the University of Kentucky basketball program and many UK fans.

Coach John Calipari constantly chastised fans for not showing enough support for what turned out to be a 9-16 team that could only watch March Madness.

However, Calipari seems to be making a concerted effort to re-connect with fans. He had basketball camps across the state again in the summer. He recruited more shooters. He’s embraced the name, image and likeness opportunities.

So far, so good. Even though Rupp Arena has not had full capacity crowds yet, that’s been due more to the competition Kentucky has played at Rupp. Fans have been enamored with center Oscar Tshiebwe and point guard Sahvir Wheeler, two transfers who have provided needed energy and charisma.

“You will always have people chirping but I believe a lot of that is from people that are not really our fans,” Calipari told fans who stayed court side for his postgame radio show recently. “All of you stayed here to listen on the radio before you leave. Who does that? Only you people do this.

“A story came out that the No. 1 program in the country is Kentucky based on fans and what advantages we have at Kentucky. You (fans) are crazy, but I love it.”

Calipari also insisted that all “outspoken” UK fans might not be true Kentucky fans.

“I know how many people throw stones at us from other schools and act like they are our fans,” the Kentucky coach said. “Or how many fans criticize and may have never been to a game.

“That is clutter I don’t listen to. I am thankful for all you fans. For me, everywhere I go, people are respectful. I hope you know that I try to be respectful and try to engage with our fans because I get to coach here and have these kinds of fans follow our program. I’m lucky.”

Calipari never fails to stress personal development with his players. He had them do community service on Thanksgiving at the Salvation Army and Hope Center.

Calipari’s team has rebounded from an opening loss to Duke by getting more accustomed to playing together and figuring out individual roles. Calipari says he’s holding players accountable but sees the team improving.

“I told the players how thankful I am to get to coach this group,” he said to the fans.

“They are good kids and good basketball players, too.

“The opportunity to be a coach here and have you all as fans … I don’t look at Twitter. I don’t look at newspapers and would not know what they write. I just want to help our team get better and your support does help us get better.”