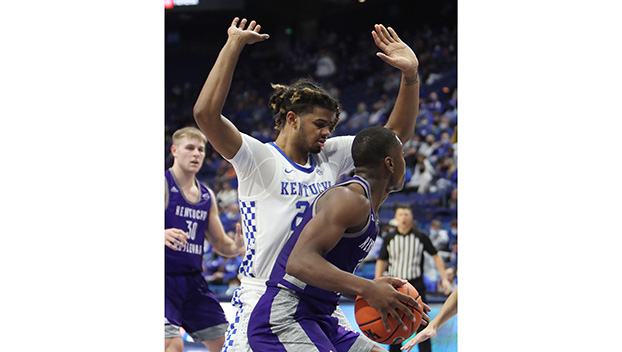 Bryce Hopkins (23) defends in the paint against Kentucky Wesleyan. - Photo by Jeff Moreland

Bryce Hopkins was a four-star player and consensus top 50 national recruit — he was as high as No. 33 by ESPN — but the 6-7 Kentucky freshman seems to have all the skills that should have made him ranked even higher.

“It doesn’t really matter to me,” Hopkins said about the rankings. “I am really not sure why I wasn’t but I really can’t control that right now. I am at one of the greatest schools in college history. I am just blessed to be here. I can’t do anything about the rankings. I just want to do the best I can now.”

He averaged 24.4 points, 12.5 rebounds, 3.0 assists, 1.8 steals and 1.5 blocks per game for Fenwick High School in Oak Park, Ill. He was a stat-stuffing player who consistently found ways to help his team win.

Kentucky assistant coach Orlando Antigua recruited Hopkins when he was coaching at Illinois. He’s not been surprised by what he’s seen from Hopkins.

“The biggest thing with him is he was able to change his body,” Antigua said. “He has the skills to handle the ball, shoot. He has a physical presence to him you need to have on the wing. He has a chance to be really, really good.

“He has to be able to defend and continue to rebound. He can rebound and start the break to initiate the offense. He can help us play really fast.”

Hopkins wouldn’t deny that he needed to lose “baby fat” to get in better playing shape.

“I knew I needed to transform my body. That was one of the bigger things that I wanted to do coming in here,” Hopkins said. “Just getting the pro style body is going to be big for me getting to the next level.”

Assistant coach Bruiser Flint says Hopkins has had “his moments” where his talent is obvious.

“He has a chance to be a very special player here. He just has to continue to keep doing it. Just improve and get better and learn how to be a good player,” Flint said. “You can see his talent. It is definitely there and he has a chance to be special.”

“I would probably just say I was not highly ranked coming in here and maybe that’s why so many people are surprised with me now,” he said. “I know the work I put in and all the time I spend in the gym, so it is not a surprise to me. Me and my family know the work and time I spend on my game.”

Hopkins has done his homework about Kentucky. He talked to former UK star Tyler Ulis, a Chicago native, to learn more about what coach John Calipari would expect from him. One thing he knows is that communication is vital.

Hopkins could play a wing position or power forward for Calipari and has switched spots with Kellan Grady and Daimion Collins in practices. Hopkins doesn’t care where Calipari uses him.

“The way he runs his offense, there is just a lot of movement on the perimeter. I am fine with wherever he puts me,” the freshman said.

Hopkins has been compared to former UK player PJ Washington, who is now with the Charlotte Hornets.

Hopkins believes there is a “little PJ Washington” in his game.

“Just the versatility he had is like me,” Hopkins said. “One thing about me is I am bigger. I am 6-7, 6-8 but I have guard skills. When I am on the perimeter, I can take a bigger guy off the dribble or I can take a smaller guy and go to the paint and get a bucket. My versatility is where I can see some PJ Washington in my game.”