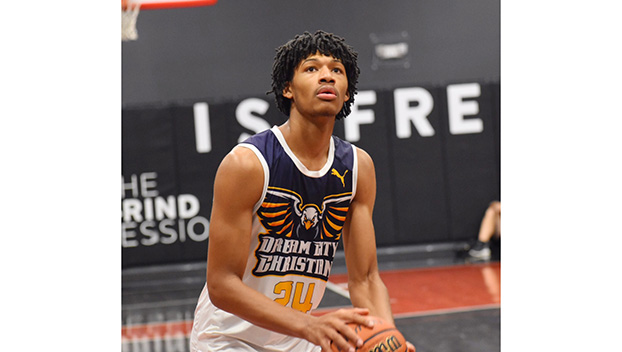 Kentucky commit Shaedon Sharpe is an efficient scorer who is ranked No. 1 in the 2022 recruiting class.

No one in Kentucky probably knows more about UK basketball commit Shaedon Sharpe than Dan Hudson. He’s director of the Grind Session and has been the organizer/director of Marshall County Hoopfest and McCracken County Mustang Madness — two events where Sharpe has played.

Hudson watched him play as a sophomore at Sunrise Christian (Kan.) before he transferred to Dream City for his breakout junior season that continued with his impressive summer league play.

“The thing you like is how efficient he is,” said Hudson. “He will get 20 or 25 points but it is a sneaky 25 on 6-for-8 shooting and free throws. He shoots a high percentage. I think he knows he can score at any time he wants but he chooses to pick his spots.”

Hudson said those closest to Sharpe told him early that he could be special like some other recent players from Canada.

“He was coming off the bench at Sunrise as a sophomore. It was just a matter of him getting enough playing time to show what he could do,” Hudson said. “Once he realized he could do it on a big stage, he gained more confidence. Once he figured it out this past winter, he made life miserable for everyone.

“He does everything at a high level, including playing defense. He is a shot blocker with a 42-inch vertical and can do a lot of stuff around the basket. His passing is also at a high level. He has a high basketball IQ.

He’s an incredible kid off the court, too. Kentucky fans are really going to love him.”

He may also be on campus a lot earlier now than originally expected. Instead of playing a full season with Dream City Christian, Sharpe may graduate in December and enroll at UK in January to have a semester to practice and work out before his freshman season.

Dream City opened its season in Las Vegas last week and Sharpe had 24 points on 10-for-15 shooting and nine rebounds in his team’s win.