Robinson committed to Kentucky before flipping to Nebraska 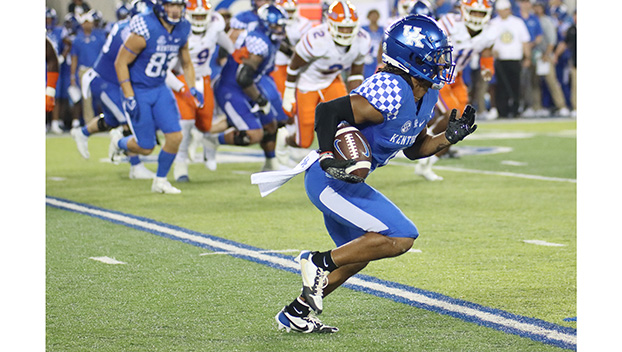 Kentucky’s Wan’Dale Robinson scrambles for yards after making a catch against Florida. - Photo by Jeff Moreland

Thanks to former UK All-American punter Max Duffy and his “Pin It Deep” podcast, receiver Wan’Dale Robinson finally confirmed why he initially committed to Kentucky and then flipped to Nebraska before signing day. He then spent two years at Nebraska before transferring to Kentucky where he has 29 catches for 467 yards and three touchdowns in five games this season, including a 41-yard dazzling touchdown catch in last week’s 20-13 win over Florida.

The former Western Hills star was down to Kentucky and Nebraska when he committed to UK even though it had seemed to me and others that he was more enamored with Scott Frost’s offense at Nebraska than he was UK’s run-oriented offense.

“Halloween comes and me, my dad, and my trainer were on the phone with Frost. This is the day before I’m announcing. They know I’m coming and there is this big misconception on how I’m being used in their offense,” Robinson told Duffy and co-host Miles Butler, a former UK kicker.

Robinson said he made the safe choice committing to UK.

“That whole week everybody was like, ‘Are you going to UK?’ and all this stuff. So I’m feeling that pressure like I need to go to UK to make everybody happy.”

In his heart, though, he still liked the offense at Nebraska and when UK only beat Vanderbilt 14-7 late in the 2018 season and passed for just 18 yards after he made his commitment, he knew he had made the wrong choice for him when he remembered Kentucky barely being able to throw the ball.

“I was like, ‘I can’t do this.’ As a recruit, I’m seeing it, and I’m like, if I come there, they’re still not going to throw the ball. At the end of the day, it’s who’s behind the center, who’s calling the plays,” Robinson said.

“That was it for me essentially not coming in the beginning.”

However, he came back to UK after Liam Coen was brought in as offensive coordinator and he’s been the consistent playmaker the Cats needed at receiver and is a huge reason UK is 5-0 going into Saturday night’s game with LSU.

“He is just amazing,” Kentucky coach Mark Stoops said. “He plays so hard and with so much heart.”