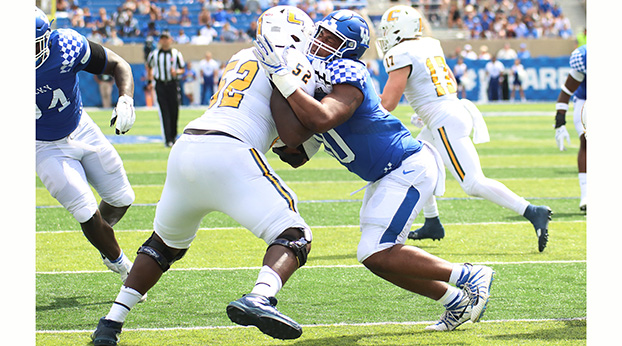 Kentucky offensive tackle Darian Kinnard (70) will be one of the key members of the Wildcats’ Big Blue Wall leaving UK after this season. - Photo by Jeff Moreland

“He is a great kid, great student, great personality,” Antonio Hall said. “He’s a bit of a practical joker and likes to pull one on the old man when he can. But he’s a big, physical kid who is just coming into his own. He has great length and athleticism. He wants to play in the SEC.”

Nikolas Hall is rated among the nation’s top 100 linemen and had offers from Baylor, Texas A&M, Ole Miss, West Virginia, Virginia Tech, Arizona State, Oklahoma State, and others. He is rated as the nation’s No. 73 offensive tackle by 247Sports Composite and top 100 players in Texas.

“I did not try to steer him in any direction,” Antonio Hall said. “I tried to give advice when needed and let him make his own decision.”

“Coach Schlarman is just a special guy. He is sorely missed. Nikolas and him had a special bond,” Antonio Hall said.

The former UK standout already knew new UK offensive line coach Eric Wolford because he is from Youngstown, Ohio. The two knew a lot of the same people. He’s confident Wolford can develop his son “mentally and physically not just for the SEC but for the next level.”