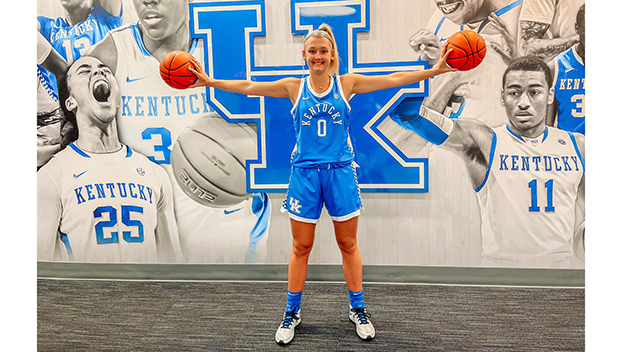 Freshman Leah Macy already has 12 Division I scholarship offers, something she never expected this early in her career. Her offer list includes one from Kentucky.

She is only going to be a freshman this season but Leah Macy already has 12 college basketball scholarship offers. The list includes Kentucky and in-state schools Western Kentucky, Eastern Kentucky, and Murray but she also has offers from Oklahoma, Arizona, Mississippi State, South Florida, Georgia Tech, Arizona, Illinois, and Oklahoma State.

“It is crazy to think about but all the hard work and training time I have put in and it is paying off. It’s exciting,” said the 6-2 freshman forward who played at Elizabethtown last year but has transferred to Bardstown.

“I take equal pride in my scoring and rebounding. If you rebound, it can help you score. It all flows together,” she said.

Macy is at Bardstown with her younger sister because it is a “better fit” and she has a “special connection” with Bardstown coach Amber Courtney (her mother already teaches at Bardstown Middle School). She also knows Bardstown senior Jaileyah Cotton, who averaged 21.4 points and 7.2 rebounds per game last year when Bardstown finished 20-7.

“I am excited about playing with Jaileyah,” Macy said. “I think we can be a pretty special duo. I like the fast tempo they play and I like coach Courtney a lot.”

She also likes the recruiting attention she’s already received, including the Kentucky offer.

“The Kentucky offer is pretty special. It is so close to home and stuff like that. It is pretty cool and that offer for sure is special above the other ones,” Macy said.

However, she has not grown up a Kentucky fan.

“I grew up as a Louisville fan, but in the recruiting process that does not matter, I am not a die-hard Louisville fan. I watch every team now that I am being recruited,” Macy, who will not be 15 until December, said. “This year was my first go-round with EYBL and I was not sure what to expect. Once recruiting started going, I did think I might get some offers but not this many and not one from Kentucky.”

The offers have not changed her work ethic. She recently attended the John Lucas Top 160 Camp.

“I had always heard that it was an intense day and a half and it was,” she said about the camp conducted by the former NBA player/coach. “We did a lot of high-level skill work and conditioning and some really competitive 3-on-3 and 5-on-5. I really enjoyed listening to coach Lucas give us advice on who we should surround ourselves with and what kind of expectations we should have for ourselves.”

She also got to see some BlueStar30 summer teammates and said the camp challenged her “mentally and physically” to push herself even more.

“I have always been tall for my age,” the Bardstown freshman said. “Once I picked up a basketball, I loved it. I did play softball but basketball has always been my sport.”

College coaches like her versatility, especially for a freshman.

“I can handle the ball, play inside, shoot the 3. Anything the team needs I try to do. I keep growing as a ball handler with post moves. That’s a big part of my game and I know I can still get a lot better,” Macy said. “I do fitness workouts twice a week. I am in the gym all the time. I just like having a basketball in my hands. I can never sit still.”

She’s also remarkably mature for her age. She’s adjusted to being interviewed frequently and also talking to college coaches to start building relationships.

“I am going to take a lot more unofficial visits in the next year or so and try to get to know coaches even better but also keep having fun with it while working on my game,” Macy said.