Oxendine could be a breakout star for Cats this season 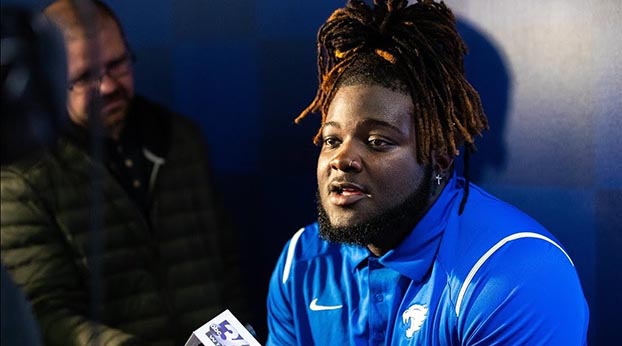 Redshirt freshman defensive lineman Octavious Oxendine is learning all he can on and off the field from senior Josh Paschal. (UK Athletics Photo)

If you are looking for a potential breakout star in the Kentucky defensive line this year, pay attention to 6-1, 318-pound tackle redshirt freshman Octavious Oxendine of North Hardin.

He played in three games as a true freshman in 2020 but a lot more is being expected from the four-star recruit who picked UK over Tennessee and others.

How smart? Stewart said he has used UK senior defensive lineman Josh Paschal to mentor him.

“He is like Josh’s shadow. What Josh does, he does,” Stewart said. “He is always working with and competing against Josh. That’s what you have to do to develop and improve your skills.

“He has taken on that with Josh and Josh is really helping him come into his own. He’s a good kid with an unbelievable work ethic, so that helps, too. I love that kid. He is one guy I push and coach hard because he wants to be great and he wants to be pushed. I am expecting a lot from him.”

Another player to watch is sophomore defensive lineman Josaih Hayes of Mississippi. The 6-3, 310-pound Hayes played in five games last year but had what Stewart called a “really good offseason” to get ready for this year.

“He is looking good. I watch him work out every day and he is just a powerful, explosive young man,” Stewart, a former UK defensive end/linebacker and 13-year CFL veteran, said. “By the end of the year people are going to know and love him.

“He has a great personality. He is a momma’s boy and if I have any issues I call her and she will straighten him out. Guys just take to him. He was highly recruited out of high school and has been doing a really good job. I am really excited to see what he is going to do.”

Another sophomore, 302-pound defensive end Isaiah Gibson, is another new name to remember. He had five tackles and a quarterback hurry in nine games last year.

“He has the size and ability. He is fast. He has every tangible measurement you want in a defensive lineman,” Stewart said. “Now he just has to put it all together.

“He is one guy that could be the X-factor for us this year. I am excited to see how he starts out and competes. But I really think he could be a big surprise.”