Levis could be ready to start for UK in opener 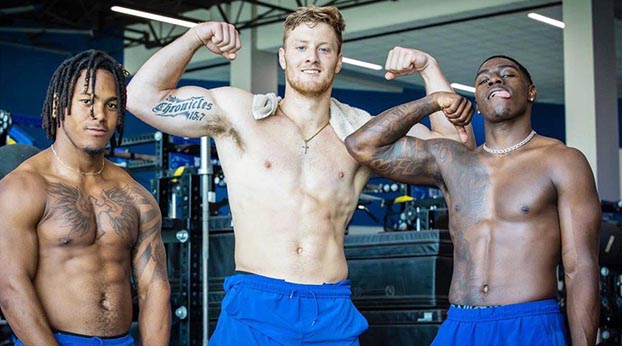 Quarterback Will Levis poses along with receivers Wan’Dale Robinson, left, and Josh Ali after a summer workout. (Twitter Photo)

Whether it is the transition from high school to college or to a different college after a transfer, it can be overwhelming to get to know so many new teammates — especially for a quarterback who knows he must connect with players to be a team leader.

“You have to learn like 150 new names and I would be lying if I said I knew everyone’s names on the team and staff even now,” said quarterback Will Levis, a transfer from Penn State. “It’s a process to learn how everyone’s minds tick. It has been fun to attack that but it has been challenging.”

Still, many believe Levis is in position to be Kentucky’s starting quarterback when the season opens Sept. 4 against Louisiana-Monroe. Coach Mark Stoops and offensive coordinator Liam Coen continue to insist it is a three-way battle between Levis and returning UK quarterbacks Joey Gatewood and Beau Allen.

The former three-star recruit from Connecticut said one reason he came to Kentucky was to enhance his chances of playing in the NFL. That’s the type of recruiting pitch coach John Calipari usually makes to recruits wanting to play in the NBA but the addition of offensive coordinator Liam Coen — who came to UK from the Los Angeles Rams — had the same type of appeal to Levis.

“My immediate goal is to win games at Kentucky and from team success comes individual success,” Levis said.

On the Behind Kentucky Football podcast, he said Coen stressed how the UK offense could prepare him for an NFL career.

“Seeing the offense the Rams used made me realize how much it suits my strengths,” Levis said. “I have not been under center since high school, but I’ve worked on that and I am more comfortable with that now.”

Playing in the Southeastern Conference rather than the Big Ten also had a big appeal for Levis because he feels that will also help his chances of playing in the NFL.

“I want to play and beat the best teams,” Levis said. “Just playing in a good conference on a good team and having the connection with the coaches I did is why I am here. I instantly hit it off with the coaches and how they approach the program as a whole. I believe in them and they believe in me.”

That’s why he made his commitment to UK without being able to take a visit due to COVID protocols. He also was finishing his finance degree at Penn State and as a graduate transfer along with the COVID do-over year he has three years of eligibility to use if he wants at Kentucky where he is working on a master’s degree in finance. He recently was featured on a national financial podcast.

Levis had been “itching” to take live snaps with teammates and finally got to do that last Friday on the first day of fall camp.

“I am just excited to play some football,” Levis said. “I love what I have seen here and now it is time to get out on the field and get ready for the season.”