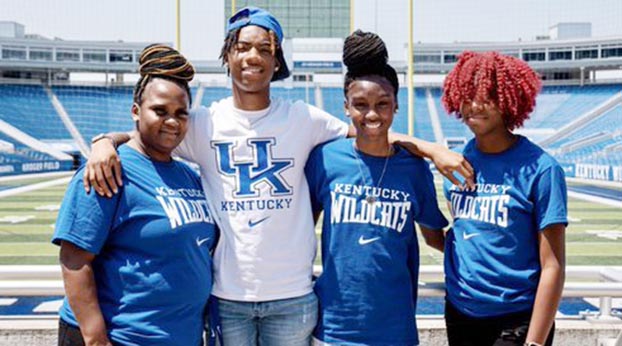 Jordan Anthony has world-class speed that he believes will fit perfectly into Liam Coen's offense at Kentucky. (Twitter Photo)

He grew up in California but didn’t start out playing football. Instead, Jordan Anthony studied the game until he was old enough to play. He eventually moved to Mississippi but didn’t even play football his freshman year of high school.

His sophomore season he did play but was just used on defense. However, the speedy Anthony got a chance to play receiver last year for Tylertown High School and had 15 catches for 700 because of his blazing speed.

His 100-meter dash time of 10.21 seconds ranks second in the world in the under 18 category and his 20.86 in the 200 ranks fourth according to the International Association of Athletics Federations — an organization of more than 160 countries.

“I am not just a track guy. If you watch my film you will see I am a football guy and always will be,” said Anthony. “Football is my first love. I love blocking and bringing excitement to the game. I would rather help somebody else score by making a block than scoring myself.

“I think I am a versatile player. If you see my film, I can break down a defense. I can sit in windows. I am a very smart guy when it comes to running routes.

Kentucky will be happy for him to score as often as he can. He verbally committed to the Wildcats last month after also considering Mississippi, Florida State and Boston College. He also had track offers from national powers Alabama and LSU. He does plan to run track at Kentucky as long as it does not interfere with football.

Anthony says he was “actually slow” before getting really fast in the last year. Of course, a “slow”100-meter dash to him was 10.9 seconds before he exploded on the national scene with his 10.21 at the Nike Outdoor National Championship. He did that even though he had not been training for about four months and just competed to see how he might do.

While some schools recruited him as a lockdown cornerback because of his speed, the 5-11, 165-pound Anthony says Kentucky talked “exclusively” about him as a receiver. He says new UK offensive coordinator Liam Coen told him UK wants to “air it out” and how well he fits in with that system.

“I think teams are going to have to be ready for us with this offense,” Anthony said. “He wants to just pick you apart and get the ball to different receivers.”

The Mississippi receiver announced his commitment during a visit with family to Lexington but said he was committed before he ever got to campus.

“Just nobody knew it until I committed but I was definitely planning to commit while I was in Lexington,” he said. “I trust coach (Mark) Stoops and his staff to take care of me.”

“Coach (Sumrall) is just Coach. He will always be himself. He will tell you what is right or wrong. He just tells you like it is and I like that,” Anthony said. “He just understood me. Kentucky will develop me as a young man and I will get a great education. A diploma lasts longer than ball. Coach (Sumrall) has been like a father figure to me.”

Anthony’s father had a “big impact” on his life before recently passing.

“If not for him, I would not be playing. His death gives me motivation. He had been waiting for this moment for me to be able to get a great education and play on the big stage,” Anthony said.