Rodriquez could be nation’s top running back 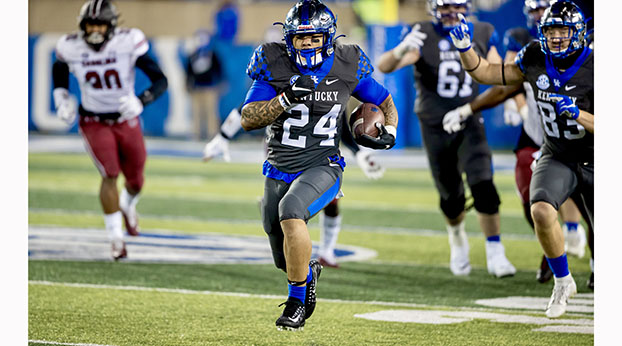 Chris Rodriguez should clearly be UK's No. 1 running back but could also be one of UK's biggest cheerleaders when he's not in the game. (UK Athletics Photo)

It is no surprise that Kentucky’s Chris Rodriguez is on the Doak Walker Watch List used to pick the nation’s top running back each season. The 225-pound Rodriguez ran for 785 yards and 11 touchdowns in nine games last year and had four 100-yard rushing games — all against SEC-only competition.

He went 105 straight carries without being tackled for a loss and gained yards on 116 of his 119 rushing attempts while leading the SEC in yards per attempt at 6.6 and led the SEC in rushing yards per game at 87.2.

Rodriguez is also on the Maxwell Award Watch List for the nation’s most outstanding player after deciding not to put his name into the NFL draft to return to UK. Now he’s just ready for the season opener Sept. 4 to get here.

“I really just wish it was closer to the season,” he said. “It is not easy going against our defense in practice. Those dudes know what we are doing and where it is coming from. I am just ready for Sept. 4. You guys (UK fans) better be there and better watch.”

Former UK all-SEC running back Anthony White believes Rodriguez is sincere when he praises UK’s other running backs and touts what they can do this year even if that might mean fewer attempts for him.

“I have been in locker rooms where the leader feels he needs the ball but the best situations are when the leader is the biggest cheerleader when he is not on the field because he’s comfortable knowing he is the leader. But there are times when the star guys worries others are nipping at his heels and he has to maintain his superiority and play all the time,” White said.

“I think Chris will be that cheerleader type. He knows the game is still going to hinge on his production and that he will be back out there if he comes out for a rest. He understands he can’t play every play and the better those other guys do, the better the team will be and probably the easier his job will be.”

Rodriguez also likely has a little extra motivation for the season after he was named only to the preseason all-SEC third team despite the impressive 2020 season he had.