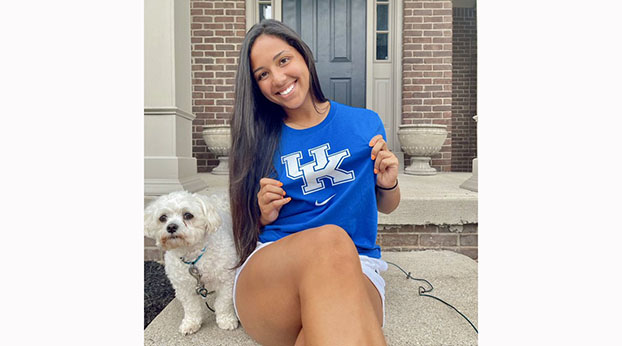 Former Scott County softball standout Kennedy Sullivan grew up a Kentucky fan and will now get a chance to play for the Wildcats. (Twitter Photo)

Kentucky softball picked up a valuable addition in the transfer portal when former Scott County all-state pitcher Kennedy Sullivan transferred from Western Kentucky to UK where she will have two years of eligibility.

Sullivan was 9-0 last season with a 2.40 ERA in 70 innings but also hit .358 with 14 home runs and 49 RBI’s. She was the 2021 Conference USA Tournament most valuable player and helped Western get into the NCAA Tournament for the first time since 2013.

Sullivan was the Class 3A player of the year in 2018 at Scott when she was fourth in the state with 14 home runs and 11th with 52 RBI’s. On the mound she was dominant with a 0.24 earned run average in 116 innings with 19-2 record when she allowed just four earned runs. All that kept her from being the state’s best pitcher was current Alabama star Montana Fouts, who had a 0.09 ERA in 232 innings at East Carter. She had a 0.76 ERA as a junior and 0.92 as a sophomore.

Sullivan had 747 strikeouts those three seasons.

Sullivan grew up a UK fan but was never offered a Kentucky scholarship by coach Rachel Lawson even though Sullivan went to Lawson’s camp to “try to get noticed” by the UK staff.

“At that point recruiting was a lot different. I remember some people having committed when they were in eighth grade and 13 years old,” Sullivan said. “I think it was just kind of a panic for me. I think I committed when I was 15 or 16.

“I almost went into panic mode and I felt like I needed to take the first offer I got because if not I didn’t know what I would be left with (if I did not). Western was my first offer and it was a good one and I just decided to take it.”

Yet when she decided to leave Western Kentucky, it did not take long for her to commit to Kentucky even though she had considerable interest from numerous college coaches.

“At Western I wasn’t into it as much. I felt myself not enjoying softball and I had played softball my whole life and knew that wasn’t going to work and felt like I needed to make a change because I love softball,” she said.

“I got into the transfer portal and started talking to some coaches and then coach Lawson got in the picture. Kentucky has always been my dream school since I was like 10 years old and I always wanted to come here. Once I started getting to talk to her and came on my visit, it was pretty much in my mind this is where I was going to end up.”