UK alum McLaughlin on quest for gold in Tokyo 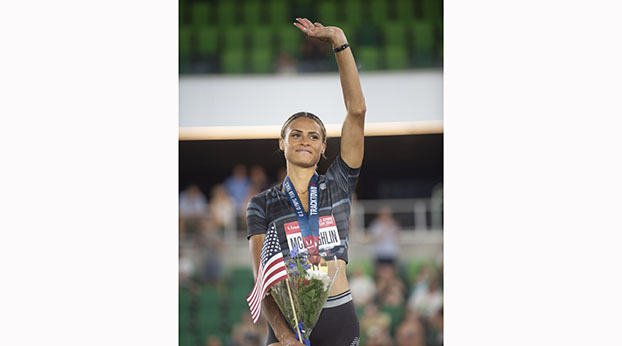 Former Kentucky hurdler Sydney McLaughlin is seeking a gold medal in Tokyo as a member of the U.S. Olympic team.

Former Kentucky hurdler Sydney McLaughlin will begin her quest for an Olympic medal Saturday in the 400-meter hurdles in Tokyo after setting a new world’s record of 51.9 seconds in her last race at the U.S. Olympic Trials. The 400 final will be Aug. 4.

McLaughlin is part of the new breed of track athletes who have been setting high marks going into the Olympics.

“I think it is a crazy time seeing so much change,” McLaughlin said. “It is really important and really cool to be part of this new wave and kind of introducing the new generation. It’s really entertaining to people on the outside to watch but also for us to know we can take it to a whole new level. It pushes you to be the best you can be and pulls the best out of everyone on the track. It is awesome.”

Her success is no surprise. She qualified for the 2016 Olympics when she was in high school and in her one season at UK in 2018 she won the 400 hurdles in the SEC and NCAA. Her time of 52.75 seconds still is the NCAA record.

She says breaking the 400 world’s record was a “confidence booster” going into the Olympics and justified the coaching switch she made last year to Bob Kersee even though she had won the silver medal at the 2019 World Championships.

“It (the record) brought me peace of mind knowing I made a great decision (switching coaches),” she said. “I think it is a good place to be.”

She got to train with Allyson Felix, a versatile sprinter with six gold medals — including in 2004 when McLaughlin was 5 years old — who is headed to her fifth Olympics. McLaughlin admitted if not for the pandemic postponing the Olympics in 2020 she might not have made the coaching change.

“I was grateful for the time to sit down and look back on 2019 and make a decision (to change coaches),” she said during a Zoom conference before leaving Los Angeles for Tokyo. “The circumstances were unfortunate but looking at what happened I am really grateful.”

It’s the same with her one season at UK that she said was “crucial” to making her transition to a professional career.

“It gave me a little bit of a taste of what it would be like training with other pros. It definitely set me up in terms of making a smoother transition (to professional track),” she said.

She’s not the only former UK hurdler participating in the Olympics. Keni Harrison (USA), Leah Nugent (Jamaica), Devynne Charlton (Bahamas), and Jasmine Camacho-Quinn (Puerto Rico) are other former Cats in the women’s events while Daniel Roberts (USA) is also in Tokyo.

“It is amazing to see all the Kentucky hurdlers doing their thing this year. It’s exciting to see us all there. It’s cool to have friends to take the journey with you,” McLaughlin said.

“I think there is still so much I can learn. I guess it is just really to focus. Everybody’s journey looks different. Nothing is guaranteed. You have to take the opportunity in front of you and not look around at what others are doing. For me to focus on my lane and 10 hurdles does make the difference instead of running somebody else’s race.”

McLaughlin always feels “some sense of responsibility” being part of the new generation of track stars whether it is on social media, conducting an interview or running a race.

“I do feel a great deal of responsibility but it is a blessing and honor to be part of USA Track & Field and the nation we are,” she said.