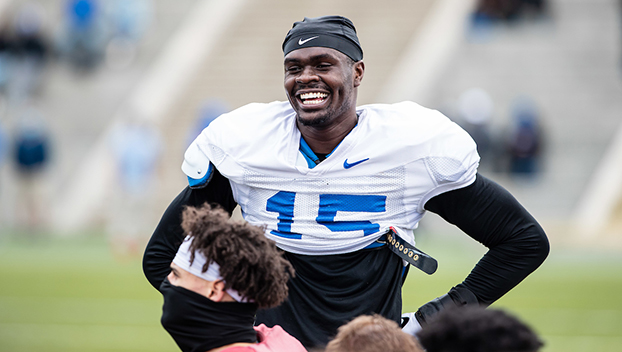 Linebacker Jordan Wright is one of the returning defensive starters that has UK fans optimistic about the upcoming season. (UK Athletics Photo)

With the Southeastern Conference Media Days this week, the buzz about the upcoming University of

Kentucky football season is only going to increase.

Even though coach Mark Stoops won’t settle on a starting quarterback until preseason practice starts in August, the Cats return a solid nucleus of players bolstered by some key additions through the transfer portal.

Kentucky fans are so optimistic that a conservative expectation would be a 7-5 or 8-4 season while other fans — and recruiting coordinator/associate coach Vince Marrow — believe this is the year UK can win the SEC East.

Tom Leach, the UK Radio Network play-by-play voice of the Wildcats, says the excitement reminds him of the 1998 season where UK finished 7-5 and lost to Penn State in the Outback Bowl.

“Tim Couch exploded on the scene with the Air Raid the previous year and I think there was great anticipation for a bowl game, which turned out to be the Outback Bowl on New Year’s Day,” Leach said.

“However, I think this is different because of the sustained success and also the fact that Florida and Tennessee aren’t at the level they were then and all of that fuels hope for winning the SEC East. I don’t recall that as being viewed as a realistic goal back in ‘98.”

“You had the quarterback then whereas it is a ‘to be determined’ now but also this upcoming team has the greater foundation in terms of the big fellas in the lines on offense and defense,” Leach said. “I think that buoys confidence for the BBN, too.

“And Kentucky was in position to play for the East title in 2018 (when it lost to Georgia) so that sense of hope remains emboldened.”

High expectations have sometimes turned into fool’s gold for Kentucky football as the Cats have not always handled prosperity as well as adversity. Leach admits that is a concern for a program not used to consistent success the last 50 years.

“But for the players in this program now, they are certainly used to winning. I also think the culture Stoops has steadily built around their work ethic and the fact that they’ve done it by playing physical football, which many felt was not possible, helps sustain that mindset of knowing what it takes to compete and older players passing that down to newer ones,” Leach said.

“When you play that way and the staff keeps bringing in players with the talent to make starters know their jobs could be in jeopardy, that should foster an environment that gives you a good chance to avoid those letdowns.”

Leach doesn’t think there is one “key” game on the Kentucky schedule. Instead, he thinks there are several that could determine UK’s chances to have a special season.

“The first one is Missouri because Kentucky should be a solid favorite in its other September games, so if they beat Mizzou, fans can certainly see a 4-0 start being very realistic. I don’t think it’s the be all, end all because in this league, you could lose a game like that and still make it back in October with the slate they are facing,” Leach said.

“Stoops’ teams have generally improved over the course of the season, too. Florida is another big game just because if you aspire to win the East, you need to be able to beat the Gators with some degree of frequency.

This would be twice in the last four years if Kentucky is able to win the game on the first Saturday in October.”