Bowden was two-sport star in Ohio 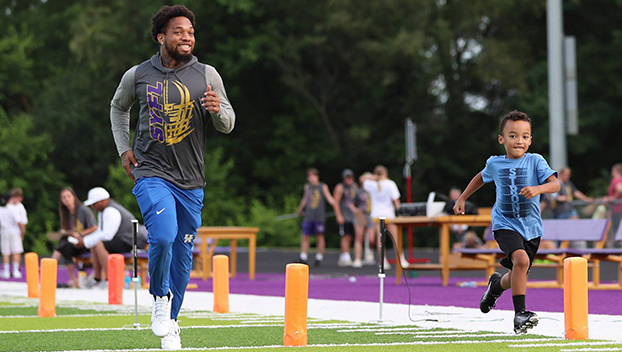 Lynn Bowden still believes if he had stayed another year at UK that he could have also played for John Calipari's team.

Before Lynn Bowden came to Kentucky to start his memorable football career, he played in the Ohio-Kentucky All-Star Basketball Game. Not only was he an all-state football player in Ohio, but he was also an all-state basketball player.

He had several Division I basketball scholarship offers and considered trying to play basketball at Kentucky also.

Looking back, does he still think he was good enough to have played for Calipari?

“Yeah, definitely. I think if I would have stayed (at UK) for another season I would have ended up on the basketball team,” Bowden said at the Somerset Youth Football League Camp.

He also said at the all-star game that people in Kentucky had no idea what he could do on the football field.

He went on to set numerous SEC records, get drafted by the Las Vegas Raiders and now plays with the Miami Dolphins.

“When I made that statement I meant it from the bottom of my heart,” he said. “Same thing with the NFL. I just have to start over and let my field work do the talking for me. Just going to be fun showing people what I can do.”