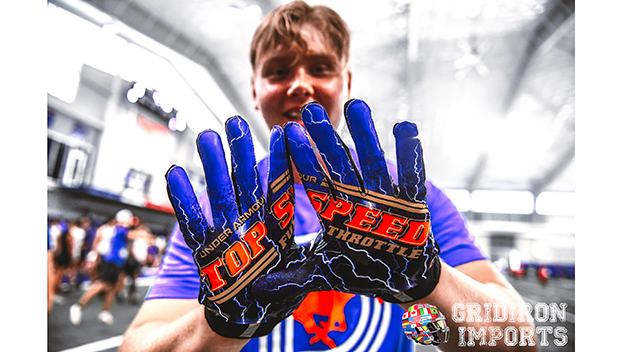 Olaus Alinen already has about 20 Division I scholarship offers even though he's yet to play a high school game in the United States. (Gridiron Imports Photo)

Olaus Alinen believes that the University of Kentucky football coaching staff saw a “great opportunity” when he was offered a scholarship almost a year ago between his freshman and sophomore years of high school.

“They were like the sixth or seventh school to offer me. I know quite a bit about them and have been in touch with them for about a year now,” he said. “It seems like a great school.

“I never expected to get any scholarship offers before I actually played (at Loomis Chaffee). I knew I would eventually get some, or thought I would, when I got to the U.S. but getting offers before I ever played was kind of shocking.”

He remains “open” on when he might make an unofficial visit to Kentucky — or any other school — since he will not be back in the United States until Aug. 24 to play his junior season at Loomis Chaffee School in Connecticut.

Alinen is a 6-7, 300-pound junior offensive tackle from Finland who already has about 20 scholarship offers and interest from some of the nation’s top programs after Gridiron Imports helped him find camps to showcase his talent this summer.

“Now that I have had a camp season in June I realize I really did deserve those offers. Before that I was thinking maybe I was not actually good enough because I had not competed in the U.S. yet,” Alinen said.

“Now that I have gone against high level defensive ends and got offers from coaches who saw me live (at camp) it was a good thing for my confidence.”

“Olaus has elite size and never stops working. He has terrific length. He’ll only get better as his footwork and flexibility improve,” Loomis Chaffee coach Jeff Moore said.

Alinen’s father, Klaus, was the first Finish player to ever sign a NFL contract. He played for Berlin in NFL Europe and spent a year on the Atlanta Falcons practice squad.

Olaus played for Finland’s under 17 team when he was 14 and the under-19 team when he was 15. Once he joined Gridiron Imports — a nonprofit foundation designed to place international players at the prep and college level —he got hooked up with Moore who called him often to convince him to come to Connecticut to attend school and play football.

“We will have a great team this year. Our team, if we find the right chemistry, we can go win New England (conference championship),” Olaus, 17, said.

His father was his football coach when he started playing but coaches him less on football and more on life now.

“He teaches me about how to be a man and how to take care of a family,” Olaus said. “I hope he gets to come over to watch me play this year but we have to see how it goes with COVID. Definitely I want him to be here my senior year to see me.”

He obviously learned his early football lessons from his father well based on the success he’s already having.

The junior says he “rarely makes mistakes” on the field.

“I almost always block the right guy. I want to play offensive line in a way that benefits my team and lets my teammates make the right plays to win,” he said. “Obviously my size and athleticism helps me execute, but it’s also more in the head. You have to know what you are doing.

“I consider myself a smart person all-around (he has close to a 4.0 grade-point average). For me it is easy to understand the game of football and how it works. Part of that is the game seems natural and part is my ability to learn stuff really good whether it is sports or school. I can take coaching and fix things quickly. I also have a good memory and no issue learning the playbook.”