Stumler could follow Lilley as national player of the year 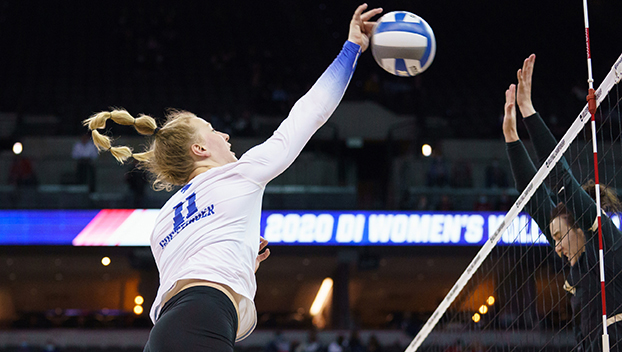 ESPN analyst Katie George believes Kentucky's Alli Stumler will be a legitimate national player of the year candidate next season.

Setter Madison Lilley not only led Kentucky to a national volleyball championship, the first in school history, but was also the national player of the year last season.

Could Alli Stumler be a legitimate contender for national player of the year for UK during the upcoming season? She had 26 kills on 51 total attacks — a .471 hitting percentage — in UK’s 3-1 win over Texas in the national title game and was spectacular during the entire NCAA Tournament.

ESPN/ACC Network analyst Katie George, an All-American setter at Louisville, thinks Stumler can be a legitimate player of the year candidate on what should be another outstanding UK team.

“She is so much fun to watch and she makes it look so effortless which is so impressive,” George said. “No moment seems too big for her.

“She had some ups and downs during the season but it never fazes her. She just comes back time and time again.”

George does think it will be a major adjustment not having Lilley for the first time to set up her play.

“You get so confident when you can anticipate and guarantee the consistency from your setter. That’s all about building relationships. The new setter is not going to be Madison Lilley, so I hope Alli Stumler steps into a leadership role and brings along her new setter and I think she will,” George said.