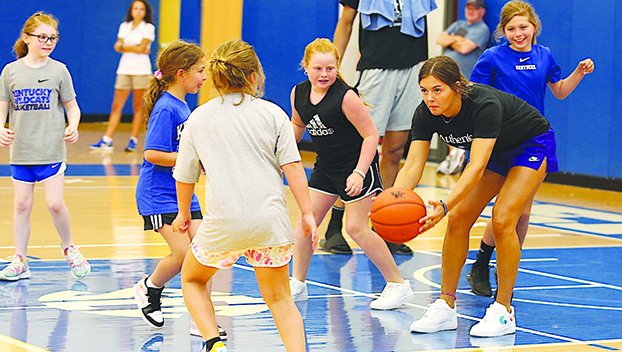 Emma King’s timing worked out to give her a rare summer basketball experience.

Coach John Calipari reached out to UK women’s coach Kyra Elzy for players who might want to work his Father/Daughter Basketball Camps at Kentucky.

“He told her he wanted to take care of the women’s team,” said King, a junior from Lincoln County.

She was the only UK women’s player available the first weekend of camp and was joined the second weekend by Blair Green, a senior from Harlan County.

“It was really fun. A lot of the dads were more excited about the camp than the little girls,” King said. “But the girls were as sweet as they could be.”

Calipari’s players also worked the camps as they did others Calipari/UK put on this summer. King said she already knew several players and had talked to most of them before the camp.

“It was good to get to see them in that setting and how they interacted with kids. It was fun to watch,” King said. “I had a great time running stations and talking to the kids during breaks to get to know them better.

“Blair and I would just try to go out of our way to talk to the girls and make them feel welcome. We both really enjoyed our time around the little girls who were mainly between 6 and 10 years old. They were so cute and so much fun. They just wanted to play basketball and have fun.”

King did not attend summer basketball camps because she did not start playing basketball until she was in the fifth grade.

“I just did AAU basketball all summer. I never really had time to think about going to camps, so I am glad I got to work these camps,” she said.

“It’s going to be a great opportunity for us to work with kids across the state who couldn’t make it to Lexington,” King said.

She’s shared the clinic information on Facebook hoping to get a large contingent from Lincoln County at the Somerset clinic.

“I am hoping all my people from home will bring their kids,” King said. “Lincoln County always has a great turnout of kids at the camps there and I am hoping to have a big name like Kentucky basketball show up will bring out a lot of kids. All the players are traveling to the camps and so are all the coaches.”

King even hopes she’ll get a chance to work at Calipari’s camp again next summer.

“This was the first time he has used women’s players. He saw how successful it was and apparently got tons of emails saying how much the girls appreciated having us there because they could relate to us and like hanging out with us,” King said. “I think it is something he (Calipari) has already mentioned moving forward about having us back.”