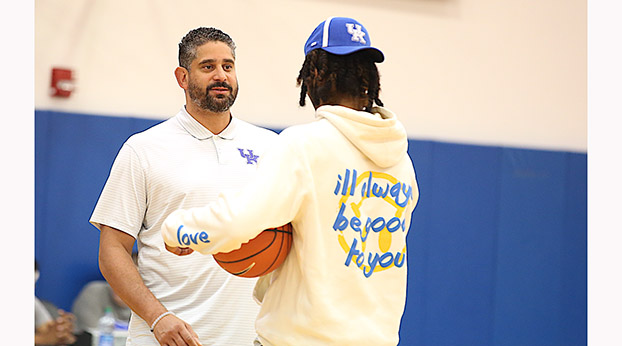 Current UK assistant coach Orlando Antigua learned about the passion of UK basketball fans after he helped Pittsburgh beat the Cats in the 1991 preseason NIT.

Kentucky assistant coach Orlando Antigua was part of some incredible wins, including the 2012 national championship, when he was on John Calipari’s staff before. But he was also part of one of UK’s most stunning losses when he played for Pittsburgh.

That came in the preseason NIT on Nov. 22, 1991, when Pittsburgh trounced UK 86-67 in Rupp Arena. Antigua played 17 minutes for Pitt and had nine points on 3-for-4 shooting from the field, eight rebounds, four blocked shots, one assist and one steal. Jamal Mashburn had 26 points, six rebounds, three steals and two assists for UK before fouling out. Kentucky missed 56 of 77 shots.

Antigua said the victory was significant for two reasons.

“Kentucky was recruiting me as a (high school) senior and I was about to come and visit and the last scholarship was given to Aminu Timberlake, so I had to change visits and wound up going to … I visited Wake Forest and then committed to Pitt,” Antigua said.

He also got his first real taste of BBN mania after the game when he came back on the Rupp Arena court.

“I remember after the game coming out and seeing 7,000 fans still in the stands listening to the (postgame) radio show, which continues to happen now,” Antigua said. “I was in awe of that. I was like what’s going on, what happened? And they’re like no they’re just hanging out waiting for the radio show.

“It wasn’t happening at Pittsburgh, so it was a neat experience to be a part of.”

Kentucky went on that season to finish 29-7 overall, win the SEC with a 12-4 mark and lost to Duke in the NCAA East Region final on Christian Laettner’s buzzer-beater.

Now he’s hoping to help get Kentucky back to a championship level, especially after the 9-16 debacle last season.

“One day at a time. Working, spending time with each other, growing, challenging each other,” Antigua said. “It takes a lot of hard work to get to March but you can’t get to March before you get to August, September, October. So we’ll worry about that once we get to those points.”