Allen and Burton have been longtime teammates 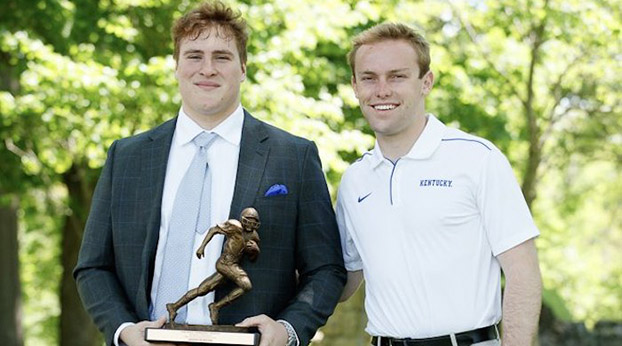 There was a time that Kentucky redshirt freshman quarterback Beau Allen and true freshman offensive lineman Jager Burton were on the same youth football team in Lexington (Allen went to play high school football at Lexington Catholic while Burton played at Frederick Douglass).

“We played together for a lot of years,” Allen said. “When we didn’t go to the same high school, we still kept up with each other. But for about three or four years when we were little kids we played together and it was a lot of fun.”

How good was the team?

“We were pretty good,” Allen said. “I didn’t have to do too much. I handed the ball off and we won a lot of games. It was fun.”

Allen is part of a three-way battle for the starting quarterback position but he also thinks Burton is going to compete for playing time this season.

“The strides I saw him making as a true freshman in the spring coming in when he should still be in high school were huge,” Allen said. “He has worked hard.

“I know the offense is new to him just like it is to all of us. He’s looking fantastic as a true freshman. He did a great job the whole spring and I really think he will do even better when (preseason) camp starts. He just knows what he is doing.”