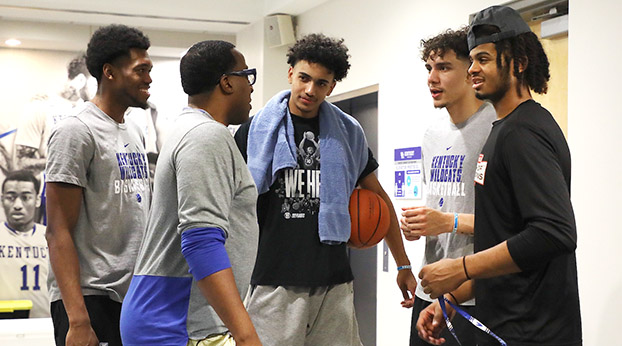 “At some point, I want to be a head coach,” Coleman said at the Kentucky Father/Son Basketball Camp in Lexington. “I had a lot of major colleges try to get me to come and coach at their schools.”

However, none of those other offers could match what he decided Kentucky had to offer.

“It’s Kentucky, there’s no other place like Kentucky,” Coleman said. “It’s a blue-chip brand. You have the Yankees, the Cowboys, and Kentucky. I think I made the right decision.”

Coleman quickly has settled into his role with Kentucky. Players seemed to gravitate to him during basketball camps. Fans who have run into him in Lexington have indicated how open and friendly he was with them.

However, there is another side to Coleman. He’s had success during his coaching career from AAU to the college ranks (he came to UK from Illinois) but he is not a good loser.

He says when his team loses, he takes it personally and thinks he can fix it by himself.

“If I am doing scouting or training, I try to train them harder or work through scouts harder,” the UK assistant coach said. “I shut off everything and have on these horse blinders. But I have gotten better.”

Still, friends know not to call or text after a loss because he will not answer.

“I have got way better,” he laughed and said. “Before I would not even talk to my friends, and that is bad. I don’t take it as hard as I normally would. I am a lot better now.”

Maybe that’s because he knows he can now get back on the road recruiting, something he could not do during the 2020-21 season because of COVID protocols. Kentucky has had players on campus for visits — both official and unofficial — this month.

Coleman joked he was “not a good house cat or house dog or whatever” when he can’t be out on the road recruiting. He said being confined to campus is “not my strength” and he is ready to be back out.

“My strength is to be out on the front line, to be visible, to sit down and be able to evaluate on the front line and communicate with people,” the UK assistant coach said. “Being at home and in the house and Zooming all over the place, that is just not my cup of tea.

“I am excited to be back out and doing what I do best and that is being out among the people and in the gyms. That is my sanctuary. I get jubilation and joy from being in the gym, so I can’t wait to get out there.”

When you do see him out, you will notice because he has an affinity to dress well at all times. He takes great pride in his wardrobe no matter what setting he is in.

“It’s a little bit more than just suits,” Coleman said. “You can’t be called a haberdasher if you can just put on a suit.

“I can put on a suit, put on ‘street wear.’ I can dress down, I got it all. Sometimes I (have) to get myself together and put myself in confinement.”