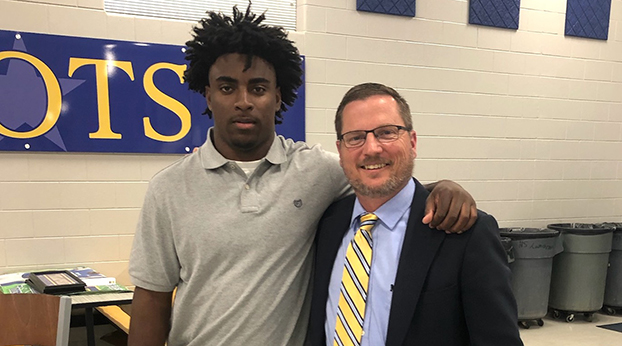 It is not hard to get coach Rob Stowe to talk about Martez Thrower, his star linebacker at Wilcox County High School in Rochelle, Georgia.

The 6-2, 236-pound Thrower signed with Kentucky in December and has the physical tools that could enable him to play as a true freshman this season.

“What you are getting at Kentucky is a guy who is physically prepared to be only 18 years old and going against grown men. He runs a 4.6 40 (yard dash). He can squat over 500 pounds, bench press about 350 (pounds). Physically, he is just well put together,” Stowe said. “There are not many 6-2, 236-pound humans that can run a 4.6 like him and have the strength he does.

“But he is also as humble a person as you will ever meet. He is just a good ole country boy. If you asked him what he does for fun, he would probably say hunting, fishing or riding 4-wheelers. He could care less about the limelight. He was never into going to a lot of camps. Even without COVID, he would not have gone to many summer camps. That’s just not him.”

What he is about is playing a physical linebacker. He was a “heavy run fitter” for Stowe but also had to play pass technique and rush the passer.

“He picks things up so well. You tell him something one time and he has got it,” Stowe said. “He is going to be a thumper. In his career here he broke four face masks. I sent (UK assistant coach) Jon Sumrall pictures to prove it.”

Thrower had 120 tackles, including 92 solo stops and 9.5 tackles for loss, his senior season. He picked UK over Arkansas, Mississippi State, Michigan State, Tennessee and others.

“Maybe my favorite highlight of him (during his senior season) is kicking off. The kickoff was not real impressive but he makes the tackle and just knocks the stew out of the kid who catches the kick,” Sumrall said.

That’s one reason Thrower had over 40 Division 1 scholarship offers. Stowe said he had the “big boys” after him and told LSU and Florida State a final no when he signed with Kentucky.

“He is a special athlete obviously but maybe an even better person,” the high school coach said. “When he left for UK, he did not know about it but the team put together a little party for him. It was really cool they did it and shows what they think of him.”

Thrower was not passionate about running track but did to help his speed. One meet he forgot his spikes and had to run the 100-meter dash in high top Air Jordan tennis shoes. He ran the event in 11.1 seconds.

“I sent Sumrall that video. That’s really good in Air Jordans,” Stowe laughed and said. “That’s just who he is. He is the kind of guy who is going to give you max effort but you never know if by his facial expressions. He can have the greatest play and everybody else is going nuts and he’ll look the same as if he made a mistake and I am chewing his tail.

“He’s just the kind of player you are looking for once in a lifetime. I really think Kentucky got the sleeper of the recruiting class. I have coached a few SEC kids and he’s the best one I’ve had.”

Even with Thrower’s physical gifts and the quality of high school football in Georgia (Thrower’s school has 300 students but has had three Division I signees the last two years), Stowe knows his former star player is still going to need time to adjust to SEC play.

“The speed of the game in the SEC will probably catch him by surprise at first. Sumrall and (defensive coordinator Brad) White will do as much as they can to prepare him with Zoom meetings and he set in on some linebacker meetings before he got there,” Stowe said.

“He is a smart football player with great football savvy and intelligence. I think he will have the opportunity to play early in certain situational packages. The Class A region we play in is the SEC of Georgia high school football. Every week we go against a Division I player. So he knows what playing good competition is all about.”