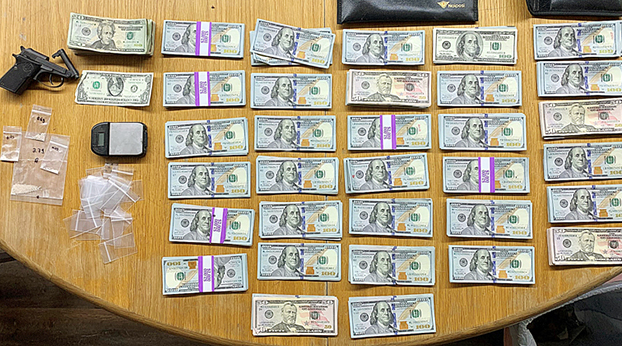 Drugs, guns and cash were seized from a residence on Hatcher Road during a narcotics investigation. - Photo courtesy of the Lincoln County Sheriff's Office

A reported overdose led Lincoln County Sheriff’s Deputies to a home on Hatcher Road where they found a woman deceased on the porch and a man and three children inside.

The man was later cited for multiple drug-related charges after a search warrant was executed and deputies allegedly located suspected heroin, drug paraphernalia, and a large amount of cash.

According to the citation, deputies responded to the call at about 10:21 p.m. on Dec. 11 along with Lincoln County EMS and Fire and Hustonville Police Chief Allen Weston.

When emergency responders arrived at the residence on Hatcher Road they found a woman deceased on the porch.

While interviewing the owner of the residence, Tony R. Bryant, 61, inside the home, deputies allegedly observed “a straw with suspected white substance on the table, scales, razor blades, and baggies.”

A search warrant was obtained.

“Upon executing the search warrant, baggies, scales, pills inside a pill crusher, a bag with several 20’s, a gun was found inside of a safe, inside of a juice box. A bag with a large amount of cash was found in the safe,” the citation states. “A magnetic lockbox was found on the table with a greyish residue inside.”

K9 Deputy Michael Mullins is overseeing the ongoing narcotics investigation.
“baggies, scales, and razor blades on top of paper plates. Plates had measurable amount of gray substance on them, appeared to be a packaging plate,” the citation states. “All these are consistent with the trafficking of narcotics.”

Three children were at the residence at the time, according to the citation.

Due to his poor medical condition, Bryant was cited but not arrested, and is expected to appear in court.

Deputies said Bryant was one of three people arrested in 2000 during a federal drug investigation.

According to news archives, Bryant was arrested after attempting to purchase $250,000 worth of cocaine from an undercover Drug Enforcement Administration (DEA) agent. He was arrested when he handed over the cash.

Following the arrest, agents followed Bryant’s former wife to a home on U.S. 27 where they found approximately $1-million more additional cash stashed inside.