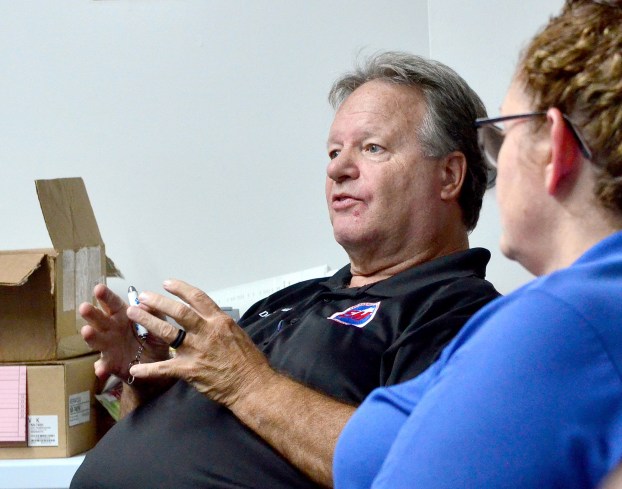 Don Gilliam, director of emergency management for Lincoln County, said local agencies are working to have a plan in place for the COVID-19 virus. (File photo)

As of 5 p.m. on Tuesday, March 17, all state government offices have been instructed to close to all in-person traffic. Earlier this week, the governor ordered all restaurants and bars to close dining rooms and operate on a drive-thru and/or delivery-only basis.

Gov. Andy Beshear said he signed an executive order to close “all public facing businesses that encourage public congregation” and cannot comply with the CDC’s social distancing guidelines. That includes large sports and concert venues and theaters, as well as community and recreation centers, gyms and exercise facilities, and hair and nail salons.

The governor has also asked for funerals and weddings to be limited to small gatherings of immediate family. He suggested holding memorials at a later time and postponing weddings. Day care centers must close by the end of business on Friday, March 20.

No quarantines have been necessary in Lincoln County, but Emergency Management Director Don Gilliam said state and local agencies are working to have a plan in place if that does occur.

“There’s going to be considerable more closings,” he added. “This thing is fluid and is changing just about every two-to-three hours.”

Gilliam said the county and county offices will be making some more adjustments in the near future, as the pandemic rapidly progresses.

“The PVA, the county clerk’s office will be making some adjustments to how you can get in touch with those folks. They will be eliminating in-person contact. You won’t be able to go to their office but that doesn’t mean you can’t get some work done, you’ll just have to contact them either by internet or by phone,” Gilliam said.

County Clerk Sonny Spoonamore’s office closed to the public at 4 p.m. on Tuesday.

“We will be in the office processing mail, web renewals and answering phones,” Spoonamore said in a statement Tuesday. “In-person vehicle transfers are suspended until further notice.”

Many people who need to renew their vehicle registration can do so online at drive.ky.gov with a credit card, according to Spoonamore. But if there are issues with delinquent taxes or insurance verification, this option won’t work.

Another option is to use the county clerk’s mail-in option. You can call the county clerk between 8 a.m. and 4 p.m. daily to verify totals before mailing payment, including notice of registration and proof of insurance. Mobile insurance can be emailed to lincolnco.ky@gmail.com. You should also include a number at which you can be reached.

The Circuit Court Clerk’s Office is still operating, Gilliam said. “Until we get further direction they are still going to be open.”

According to Circuit Clerk Teresa Reed, all written and road testing will be suspended for the next three weeks.

The Kentucky Supreme Court has also issued an order that most court proceedings from March 16th to April 10th be cancelled. All civil trials, hearings and motions have been postponed until a later date.

With the exception of emergency matters, domestic violence hearings and evidentiary hearings in criminal cases, all in-person appearances for civil and criminal dockets shall be canceled.

The Supreme Court approved additional amendments on March 17 to its administrative order. The new amendments include:

The Lincoln County Attorney’s Office remains open to window-traffic only.

Lincoln County is still waiting on more test kits, according to Gilliam.

“We have some but we don’t have near enough, and that’s why there is such a vetting process as to who actually is tested,” he said. “There’s going to be some obstacles between now and the coming days, and like I said, this thing is changing.”

As of Tuesday, the state’s number of confirmed cases was up to 26. To date, 380 people have been tested for the virus in Kentucky.

With Lincoln County schools closed through at least April 10, students are studying from home and meals are being... read more