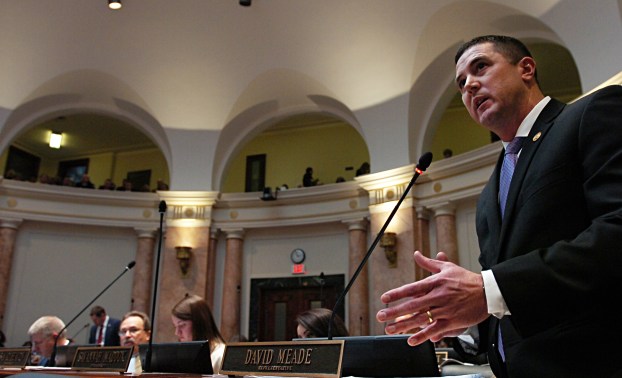 FRANKFORT, February 13 -- House Speaker Pro Tem David Meade, R-Stanford, presents House Bill 312, a bill that would make it easier for foster children to change schools after a change in home placement, in the House.

The Kentucky Senate Standing Committee on Economic Development, Tourism, and Labor, has unanimously passed HB 319, which would create the Kentucky Battlefield Preservation Fund. This fund, modeled off of similar successful programs in Virginia and Tennessee, will be used to match federal and private funding to preserve battlefields of the Revolutionary War, War of 1812, the Civil War, and Underground Railroad sites eligible for listing on the National Register of Historic Places.

The bill’s sponsor, Rep. Daniel Elliott, (R-Danville) led the effort to secure passage. Local Rep. David Meade, (R-Stanford) was instrumental in navigating this bill through the Kentucky House of Representatives. Sen. Rick Girdler (R-Somerset) will handle the bill on the floor of the state Senate.

A vote on HB 319 by the full Senate is expected to occur in the coming weeks.

“Kentucky is home to several of the most consequential battlefields in the United States,” said Adam Gillenwater, senior manager for state and local relations for the American Battlefield Trust. “From the frontier outposts of Logan’s Fort and Fort Boonesborough to the fields of Mill Springs and Perryville, Kentucky’s battlefields tell the stories of the conflicts that defined our nation’s tumultuous first century.”

“The creation of a state battlefield fund in the Bluegrass State will help to ensure that Kentucky’s battlefields are preserved and protected for the benefit of current and future generations,” Gillenwater continued. “We applaud Representatives Daniel Elliott and David Meade, and Senator Rick Girdler for their laudable efforts to pass this legislation.

The American Battlefield Trust is a national non-profit organization that has preserved nearly 3,000 acres of battlefield land in Kentucky.

The creation of a state battlefield fund and the appropriation of accompanying funding will better enable preservationists to take advantage of federal matching funding from the American Battlefield Protection Program’s Battlefield Land Acquisition Grants Program.

This 1-to-1 matching grant program has been utilized to preserve more than 32,000 acres of battlefield land nationwide. The United States Congress has appropriated $13 million for this program in FY2020.