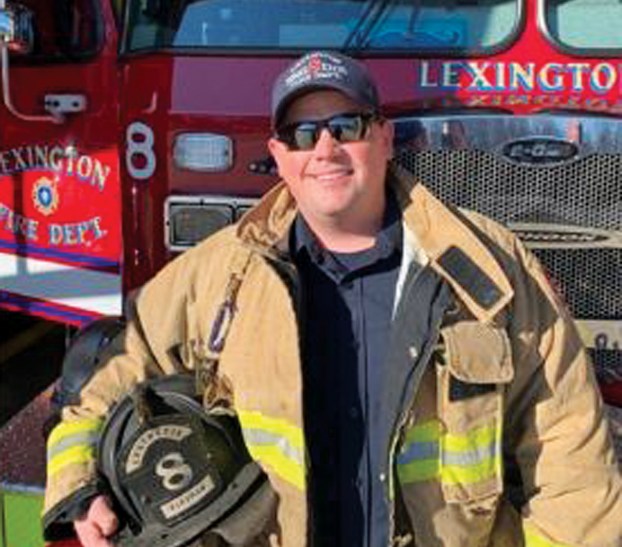 The heroic efforts of Colby Reik in the early morning hours of Aug. 1 following the gas pipeline explosion in the Indian Camp area of Moreland have been recognized by the Lexington Fire Department.

Reik, who is a firefighter for Lexington Engine Company 8, 1st Platoon, was awarded the Firefighter Cross Saturday evening at the Lexington Fire Department’s 13th annual awards banquet at the Embassy Suites in Lexington.

The Lexington Fire Department (LFD) handed out several awards, including the Firefighter Cross, which recognizes an act of heroism, bravery and stamina in the face of extreme conditions. It is the second highest award bestowed by the LFD.

The explosion of the 30-inch gas transmission pipeline killed one person, blasted a 13-foot deep, 36-foot long crater in the ground, blew a 29-foot piece of pipe over 500 yards away and shot intense flames about 300 feet into the air, which could be seen as far away as Bardstown. The blast also destroyed six structures and multiple people were transported to the hospital with burns, including Reik.

Reik, who is a Lincoln County Sheriff’s Special Deputy, received his burns while saving an elderly couple from their burning home following the explosion.

“This young man is a genuine hero,” Lincoln County Emergency Management Director Don Gilliam said after the explosion. “He had no business being where he was, and he knew that. As he was driving through, he saw an elderly man on the steps coming out of his trailer with a flashlight and he stopped and he grabbed him and took him to his car. This guy’s screaming at him the whole time but the noise was so loud he couldn’t hear. And what he was screaming was, ‘My wife! My wife!’ Colby finally realized what he was screaming, ran back to the trailer.”

Reik carried the woman out of the fire and took the couple to waiting paramedics to be transported to the hospital.

While the public has not seen the footage, Gilliam and other emergency responders have seen what Reik walked into.

“We’ve got it on video, this place is burning on fire and he sees her through the door, runs in, grabs her and carries her out and puts her in the car,” said Gilliam. “He saved those people’s lives at the risk of his own.”

Gilliam has said he’s had a hard time conveying how hot the fire was that morning, but he said the “hair was standing up on my neck” as he listened to Reik describe it to investigators.

“He said it felt like a hundred hornets stinging him. He couldn’t even blink his eyes because of the heat they were so dry. He said, ‘I’ve gone too far. I shouldn’t have been there.’ He knows it,” said Gilliam. “Strategically, he made a lot of mistakes and I’m sure glad he did, but we don’t train that.”

The following statement by the LFD has been posted on the department’s facebook page. “It is said that a firefighter is never off duty. That statement could not have been more true at 01:20 hours on August 1, 2019 in Lincoln County for Lexington Firefighter Colby Reik .. Firefighter Reik went willingly into a situation that he could have very likely not come out of, resulting in two lives saved. Congratulations Firefighter Reik for receiving the Firefighter Cross.”