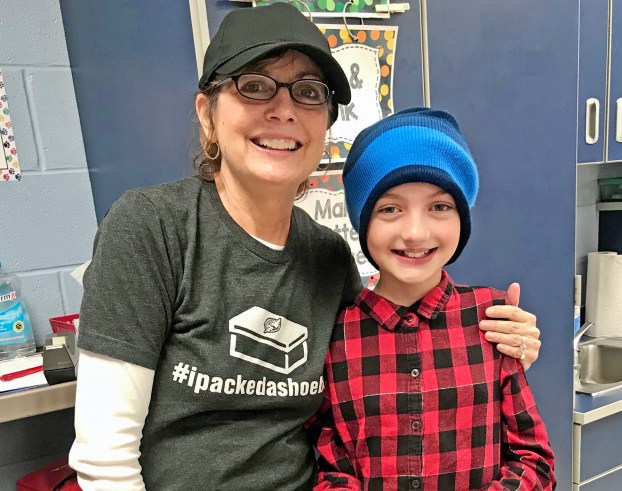 STUDENT SACRIFICE. Stanford Elementary School fourth-grader Lawryn Stevens poses for a picture with Susan Johnson, her homeroom teacher. Stevens shaved her hair off when she learned Johnson, who is battling breast cancer, would be losing her hair after chemo treatments. Stevens is wearing a toboggan as her hair grows back.

STANFORD — The impact a teacher can make on a student and a school can be very powerful. This has proven to be the case this year at Stanford Elementary School.

Susan Johnson, who  is in her 27th year as a teacher for Lincoln County Schools, has taught at the old Broughtontown and Kings Mountain elementaries and is currently at Stanford Elementary. During her career, Johnson has undoubtedly made an impact on hundreds of students and colleagues in the district, and this year she has been able to see her impact first hand.

This past September, just a few short weeks into her 27th year of teaching, Johnson was diagnosed with breast cancer. Shortly after being diagnosed, Johnson started chemotherapy treatments. She has not been able to teach since then, and her presence has been dearly missed at the school.

In an effort to support their co-worker and teacher, Stanford Elementary staff and students decided they were going to help  Johnson fight her battle against cancer. All staff members wore pink shirts that read “No One Fights Alone,” while fourth-grade students decided to wear pink on Mondays to show support for their teacher that they missed seeing. Students also were given the opportunity to hang breast cancer awareness ribbons in the school and add the name of a person they personally knew that may have been affected by cancer. There was a banner hung in the hallway of the fourth-grade classrooms in support of Johnson. The Stanford PTO also made signs of encouragement to display.

The support shown has been remarkable. But for one student, this was not enough. After learning that Johnson would likely lose her hair because of the chemo treatments, Lawryn Stevens, a fourth-grade student in Johnson’s homeroom, decided that she wanted to shave her hair off, too, in support of her teacher. Stevens carried through with her decision and shaved her hair off. This was quite the bold move for a fourth-grade girl, and all because of the impact her teacher had made in her life! This was her way to give back and support her teacher.

While Johnson is not teaching right now, she has visited her students several times, once even wearing a wig with a pink ponytail. Johnson has finished her chemo treatments and is scheduled for surgery in February. She hopes to be able to return to school in March of this year.

The annual Lincoln County Relay for Life event is still a little over four months away, however, the local committee... read more