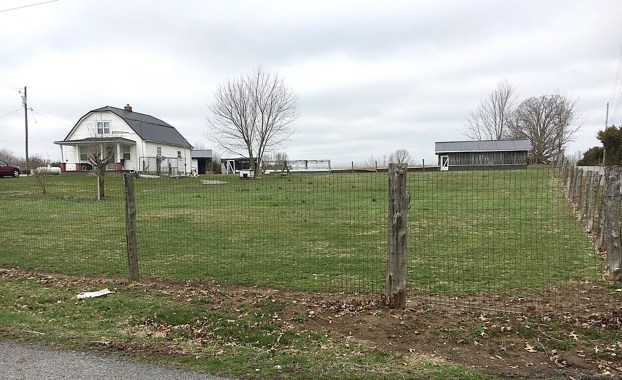 Photo by Nancy Leedy THE LINCOLN COUNTY Fiscal Court approved the purchase of this property, situated at the corner of White Oak Road and White Oak Spur, at Tuesday’s meeting.

Magistrates David Faulkner, Lonnie Pruitt, Jeff Ruckel and Joe Stanley all voted in favor of spending $70,000 to purchase a lot at the corner of White Oak Road and White Oak Spur, situated off U.S. 27 near the Lincoln-Garrard county line.

The property, owned by Fred Fields, fronts on White Oak Road and is bounded to the right by White Oak Spur, which is the road leading to Logan-Hubble Park.

“It’s on the corner of our park’s property. It’s the only parcel in that block that we don’t own,” Lincoln County Judge Executive Jim W. Adams Jr. said.

“We, Jane VanHook is here and she is the chairman of the park’s board … We were approached by the Fields family about purchasing the property,” Adams said. “Mr. Fields is quite elderly. He lost his wife a couple years ago. We had talked to the family in the past about purchasing the property. It would be a normal process for us to try to attain that property … It’s known as the chicken farm. He’s raised chickens for many, many years.”

The asking price on the Fields property, which measures a little over an acre, was $80,000. However, before the court could move forward on possibly purchasing the property, an appraisal had to be made.

“By KRS, if you’re a county government you have to have an appraisal done of any properties that are over $50,000, so we had that done by Dix River Appraisal Services,” said Adams. “The Fields family asked us $80,000 for the property. There is a house, a store building, a garage and multiple chicken coops. After the appraisal was done, it came in at $70,000. We opened up talks with the family again and they agreed to take the $70,000.”

Adams said that he had talked earlier with each of the magistrates on possibly taking in the piece of land and that all were in favor of purchasing the property individually.

“We did not vote on it because it was still being negotiated at the time,” he said.

Adams also brought the possible land purchase up before the Garrard County Fiscal Court. He got a different response from our neighbors.

“Talked to Garrard County hoping that they would be a loving partner. They chose not to be,” said Adams. “That’s part of it. I can maybe see their point. They would be investing tax dollars in a county that’s adjacent to them instead of their county.”

When Adams asked if there were any questions on purchasing the Fields property, he got no questions. He did get a request, however, on the motion process.

“If I could ask, when you make that motion, if anybody’s going to make it, make the motion to approve it and you approve Jimbo to sign the deed,” said County Attorney Daryl Day. “Then we won’t have to come back and have another meeting for you all to give him the authority to do that. That will take one step out of it. However you do the motion, assuming somebody’s going to make it, make the motion to approve the purchase of it at $70,000 and to give Jimbo the authority to sign any and all documents to close so that, when I get the deed ready – because I’m going to prepare the deed – me and Jimbo can just get together with the Fields family and we can get everything signed. Hopefully within the next week or so.”

County Treasurer Mary Hopkins also asked if the county would be writing the check.

“Typically, we write no checks unless they are standing order, utilities, payroll, etc. which are listed in KRS,” answered Adams. “We can write no checks until the bills are approved, so that’s a good question on your part.”

Day said that the court can “go ahead and say approving the check” in the motion to remedy that situation.

Faullkner made the motion that the court approve the purchase of the Fields property for $70,000, approve Judge Executive Adams to sign all documents necessary to close it and to go ahead and approve a check be written for the $70,000.

After the second by Pruitt and a unanimous vote, Pruitt addressed Judge Adams saying, “I’d’ like to thank you, Jim, for the time that you’ve put in and for keeping us up on it. I think that will help the entrance into the park.”

The purchase of the Fields property does not make a significant change in the size of Logan-Hubble Park, but the county is looking into further land acquisition which will.