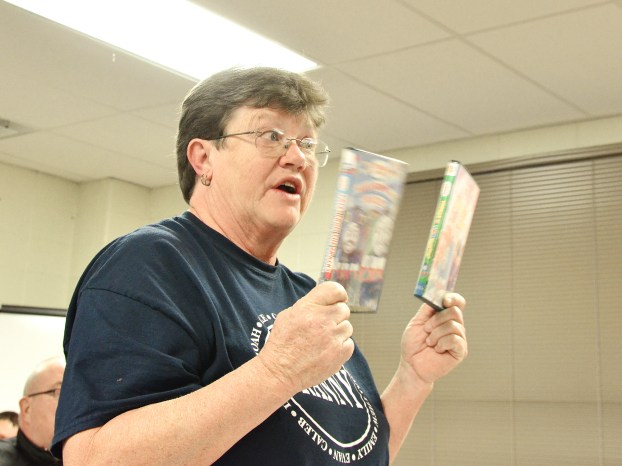 Photo by Nancy Leedy GLORIA SNEED holds up two Thomas the Train DVD’s as she makes a point during the Citizen’s Comment portion of the Lincoln County School Board meeting.

STANFORD — Following the adjournment of Lincoln County School Board meetings, it is not uncommon to see community citizens hanging around in the Student Support Center and out in the parking lot talking, both casually and about the meeting.

That will not be the case anymore.

As a result of a confrontation between community citizens and a member of the board following its December meeting, which required police presence, the board has adopted a new directive for its meetings. It is called a Superintendent’s Directive for Board Meetings and was introduced by Supt. Michael Rowe at the start of the Jan. 9 meeting.

“Due to recent events, and for the safety of students, staff and community members, all persons in attendance at this board meeting are hereby told to exit the building at the adjournment of the meeting,” he read. “In addition, everyone should enter their vehicle and leave the grounds of the Student Support Center after exiting the building. We’re not going to allow loitering in the parking lot after the conclusion of the meeting.”

“We do wish everyone safe travels to their destination as they leave. Anyone who fails to follow this directive will be referred to local law enforcement, who will be at this meeting …. in the next few minutes.”

Board chairman Tom Blankenship had an addition to the directive saying, “And I would say there are no exceptions.”

The confrontation that prompted the need for the directive occurred on Dec. 12 when, according to eyewitnesses, Jason Elliott and Kevin Carrier, followed by Jenn Broadbent, were yelling at board member Ricky Lane as he left the building and followed him to his truck.

Stanford Police Captain Barry Allen responded to the scene. No charges were filed because the incident did not take place with police present.

A Stanford Police Department officer was at the January meeting.

There would be strong words spoken indirectly toward a board member at the latest board meeting, however, they were presented before the board during “Citizen’s Comments.” During this portion of the meeting, anyone who signs up to address the board has two minutes to speak.

“I’m just granny. This is me. I’m also the granny that stands on the sideline of ball games doing this to officials,” said Gloria Sneed, as she stood up holding her eyeglasses with an outstretched arm. “I don’t have to say a word. And when he points to the door, the parking lot, the bleachers, he didn’t have to say anything back to me. We just had a heated conversation and nobody spoke a word.”

While not naming a board member, Sneed gestured repeatedly toward Bruce Smith as she continued her comments.

“I didn’t have to hear you say your sole purpose for being up there is to get McKinney opened back up. I sat here and watched you. I sat right here and I watched you beat on the emotions of your people, just like I’m beating on this table. I thought you would be an asset to this board, but somewhere along the line you lost your -e-t. A-s-s and you lost your -e-t,” stated Sneed. “I sat here, you asked about boundaries, facility reports, surplus inventory reports, the year the building was built, bus wrecks, one random bus wreck and not the rest of them that fit in along with them. It had nothing to do with educating children. It had everything to do with CPR on a dead building.”

“You know, page one of the little pamphlet I passed out prior to, proves my point. You filed page one before you did page two. Page three shows that there are 3,025 registered voters in Stanford. You know, you want to talk about McKinney not having representation, who’s representing them when you’re really concerned about the 1,260 from McKinney. You complained about your 3,025 people having heat at the last meeting. Why didn’t you talk about cost per pupil, how much more money is spent per pupil at McKinney instead of Stanford. You know, and if you want to talk about education – it’s all about education.”

“Time’s up,” interrupted Rowe. “Anybody else sign up to speak?”

Blankenship turned to Smith and said, “Bruce …. Two minutes for you, too.”

But before Smith could speak. Sneed jumped in and said. ““I signed up. I signed up to speak, too.” The two minutes she had just spent addressing the board were given to her by Stacy Estes, who was the first person to sign to speak.

“This card that I gave you that’s about education, Hustonville has a 32.53% higher graduating rate for the Class of 2019. If it was about education, why would you want your children in a 48.39% graduating class versus an 80.92% graduating class? This granny 21 times has been on school property to one of these many practices (pointing to a display of her many sports and academic t-shirts supporting her grandchildren in Lincoln County schools), and anytime I rolled up on school property, I thought about how many more of the people that voted for you are going to be banned from school property without a possibility of a pardon or parole before you find your -e-t. Before you decide we’re going to work together here. When are you going to stop,” Sneed continued. “Sir Topham Hatt (from the Thomas the Train series) would say, ‘Thomas, you cause confusion and delay.’ And if you don’t know who Sir Topham Hatt is, I brought some DVD’s for you. He explains very well what confusion and delay does to the whole island, the whole school board, the whole school system, the whole county. Thank you, and I appreciate the police presence.”

As Sneed took a seat, board member Alan Hubble immediately turned to members of the board with a questioning comment.

“Let me say something, and don’t take this the wrong way at all,” said Hubble. “I’m not for anybody. It makes no difference to me, but at every other meeting we’ve ever had, the first thing said is ‘You can’t call anybody out on the board. You’re not supposed to mention names.’ She didn’t say any names. When you’re standing there and start pointing the finger at somebody, and just keep pointing and pointing and pointing that he did this, he did this, he did this … Is that not the same as calling a name?”

Rowe answered Hubble, saying, “Our policy says that you can’t say a name or a title.” He went on to say, “I have no problem if you want to add pointing to it.”

“I have no problem with anybody saying anything they want to say but, you understand what I’m getting at. At every other meeting we’ve ever been to …” Hubble said.

“That would be good,” Blankenship said. “And I suggest we add that to it and that will clear that up.”

Rowe was in agreement.

“This statement is prepared in response to an article in The Interior Journal listing me as one of the directors for the McKinney School Recovery Incorporated. The Secretary of State site may still have me listed as a director, but my Aug. 6, 2019, resignation was accepted at the Sept. 13, 2019, meeting of the McKinney School Recovery Incorporated,” said Smith. “And with my experience with 501C3’s as a former Lincoln County Board of Education employee, I am aware that changes in the director or officers of non-profits are updated once the yearly annual report is done on or before June 30 of each year. Therefore, once that non-profit files its annual report this year with the Secretary of State, the listing of new directors or officers should be updated then.”

When the McKinney School Recovery Incorporated non-profit article of incorporation was filed on July 12, 2019, Smith, King and Broadbent were listed as the directors.

CRAB ORCHARD —  Counties across the commonwealth have joined in the movement to create 2nd Amendment sanctuaries, and now Kentucky... read more