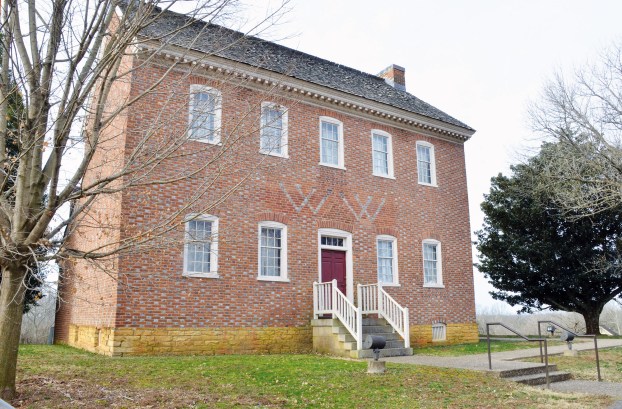 Photo by Nancy Leedy A FRONT VIEW of the William Whitley House which is now owned by Lincoln County.

STANFORD — in its December meeting, the Lincoln County Fiscal Court heard a report on the events and happenings at the William Whitley House during the county’s first year of ownership.

Martha Francis, a historic interpreter at the Whitley House, presented the report on the property, pointing out important events at the historic site while it was open to the public from May 16 to Oct. 26, 2019.

Some of the information presented by Francis included:

* Visitors to the Whitley House have come from 39 Kentucky counties, 25 states and two foreign countries. There have been 16 Whitley descendants and one Vardeman descendant to visit.

* There have been nine groups from eight area elementary schools totaling over 1,000 students and chaperones.

* A bird watching event was held at the park on May 11.

* On July 6, a group of 20 Governor’s Scholars from Centre College chose the park as their community service project.

* Heart of Kentucky United Way of Action on Sept. 25 took place at the park, with four volunteers plus Rob Oney and Francis working on painting playground equipment, park benches and picnic tables.

* There were 25 shelter rentals. The state is supposed to reimburse the county for the rentals made for 2018 for 2019.

* Volunteer picnic was held at the park on Aug.1 to discuss and plan future events.

* The Relay for Life Tractor Ride came through on Sept. 28 with 250-300 visitors and 97 tractors. Eleven volunteers helped with the event.

* A Christmas Open House was held on Saturday, Dec. 14 and Sunday, Dec. 15. There were over 100 guests. The Danville Dulcimers provided Christmas music. Sixteen volunteers helped with the event.

Francis gave special thanks to Rob Oney, Kyle Alexander and Joe Bunch and his crew for their help with maintaining the park.

While the biggest portion of the December meeting concentrated on whether to hire one or two new sheriff’s deputies, if any, and approving the salary cap for the Lincoln County Sheriff’s Office, several other actions were taken, including the Whitley House report.

Donnie Gilliam, Emergency Management Agency Director, and Trish O’Quin, EMA Deputy Director, made a special presentation before the court, thanking County Treasurer Lee Ann Smith for her dedication to the court and Lincoln County. Smith has been an employee of the Lincoln County Fiscal Court for the past eight years, serving as Finance Officer and County Treasurer. She left to take the job as Director of Finance for Lincoln County Schools. She was presented with a plaque.

Gilliam handed out two plaques during the meeting, surprising O’Quin with a plaque to thank her for her help and dedication to the EMA and for making his job easier.

The court heard from Jerry Shelton of the Lincoln County Ambulance Board, who informed the court that the county appointees on the board – Bob Floro, Billy Phillips and Keith Lemonds – were due to be recertified.

Shelton also expressed disappointment in the response time by emergency response units in the Crab Orchard area. He said they try to respond within 15 minutes but, in some instances, i.e. heart attacks, that may not be fast enough. The lack of someone on site at the ambulance service was a factor.

Pruitt said that the lack of around-the-clock personnel would be ending soon.

“East End Ambulance managed its money and is adding on to the ambulance building to make sure someone is on duty 24/7,” he said.

“I’ve been harping on that for a couple years,” added Shelton. “We never put anything in our budget to building the building so, luckily, Crab Orchard stepped up and used that money.”

Gloria Sneed of Waynesburg, upset over a recent Facebook post that was “ripping Sonny (County Clerk Sonny Spoonamore) a new one over those (nickel tax) petitions,” approached the court basically asking governmental agencies to get along.

“We just need to work together,” Sneed said. “We’ve got the Sheriff’s Office here. We’ve got Emergency Management, someone here from the water district. Why can’t we all work together.”

When told there wasn’t any more funding available, Sneed asked for agencies to “cross use our funding.”

Day bristled at the request.

“Gloria, can I point out something to you? When a house goes in on a road a school bus can’t turn around on, do you know who fixes that road and makes a school bus turnaround? This group right here. When 911 needed funding, none of the cities stepped up. You know who funds completely 911 either through a fee or tax or putting general fund money in? This group right here. I’m going to tell you, as county attorney, these five guys sitting right here, they work with a lot of groups in this county. The new building they’re talking about putting the EMS in in Hustonville, you know what group has the largest amount of money in as far as donations? This group right here. When Crab Orchard needs blacktop on a city street, you know who puts it down? This group right here. Crab Orchard doesn’t help us pay nothing for 911, no offense. Hustonville don’t pay anything on 911. They don’t go out and help us build school bus turnarounds. They don’t salt and scrape their streets. We do that, too. So, if you’re coming to this group saying why can’t they get along with everybody else …”

“You know what happens? We give people money and we do stuff for them. When we need something, they turn their backs on us if they don’t spit right in our face. I’ve felt this way for a long time, mainly over 911. So, if you’re coming to this group saying get along with everybody else, I get personally offended. I’ll take up for these five. They work for everybody.”

Sneed said, “That wasn’t what I was meaning.” And, when asked by Faulkner, “What it is exactly that you want?,” she repeated, “everybody to work together.”

“We agree with you but we have no legislative authority that says we can demand and vote for people to get along and work together. We bite our tongue a lot and take care of a lot of problems,” he said. “I don’t care if this is public knowledge. We have fought with this water company here in this town, City of Stanford Water Company. We have fought with them since 2012 to get 911 funded. We don’t get a penny of the 911 money. It goes directly to 911. It doesn’t come through this court. We have had to fight the water company. We’re up there right now digging up Lee Drive, in the city of Stanford for a water main break. They are trying to say it’s a wet well. We’re up there digging it up, paying county employees to dig it up.”

“We were going to dig it up,” Adams interrupted, “but the water leak finally blew up and they had to admit it was a water main.”

“Even when they thought it was a wet spring, they just assumed that the county’s going to go up there inside the city limits and fix their problem,” Faulkner said. “And you know why it’s an assumption? Because we’ve been doing that crap for 25 years.”

“I don’t mean to accuse you all. I seriously don’t,” said Sneed. “Nine months ago I was approached that the City of Stanford might want a building for a police station from the school board. I talked to board members that I thought would have the most influence with. No way, absolutely, positively no way under the sun would they even talk to them. So I’m not accusing you of not … I’ve set here and listened and I realize, yes, we need a new jail, and, yes, it’s going to take taxes, and they’ve got to do things and it’s going to take taxes. Let’s all work together.”

“I appreciate you all working together. I want to let you all know … I don’t think people are getting along with you. I’m a bulldog. I don’t mean to come up here and sound like I’m fussing at you.

* Approved hire of Mary Sudduth Hopkins as Lincoln County Treasurer at an annual salary of $60,153, beginning Dec. 29 and going through June 30, 2023.

* Approved adding Mary Hopkins as an authorized signer on all bank accounts.

* Appointed Mike Carrier to the McKinney Water Board to replace Les Gooch. Judge Adams filled the court in on some issues McKinney Water has. “They have a pressure problem in spots. The line needs to be replaced between the fort out here where the master meter is, where they buy water from Stanford. That line is ancient …. They need a water tower to increase the pressure in areas that they need pressure increased. That’s a huge expense. And they would like to connect with Danville, leaving Moores Lane across Hatcher Road, across Knob Lick through the country to the water tower across from Texas Eastern on Airport Road. That would be the closest and most economical place to connect to Danville Water. Of course, we’re looking at between $2-$3-million. We need conscientious people on the board.”

* Approved taking in Griffin Road, off Cash Road in District 2, and Yates Road, off U.S. 27 in front of Grace Fellowship Church in District 3, into county maintenance.

* Approved payment of $1,000 to Hopkins Concrete for labor for work on driveway at entrance  to Arcadia Subdivision and replacement of tile.

Anyone wishing to show their support to make Stanford wet will have the opportunity to put their signature on the... read more