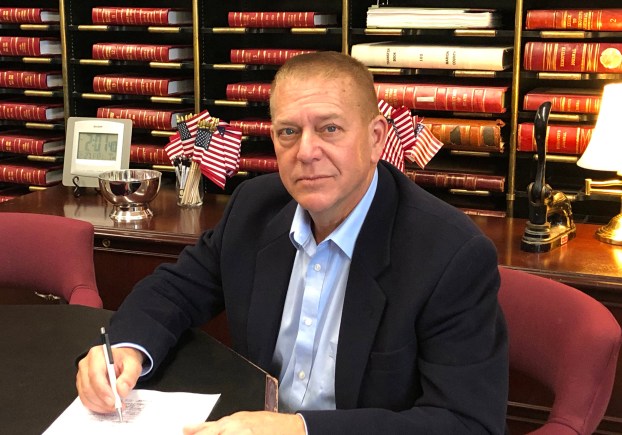 MICHAEL BROIHIER of Lincoln County officially filed for his Democratic campaign for U.S. Senate on Friday in Frankfort.

LEXINGTON — Mike Broiher, a retired Marine Lt. Colonel, farmer, and former rural newsman and educator, filed with the Kentucky Secretary of State’s office to formalize his Democratic campaign for U.S. Senate on Friday.

Broihier launched his campaign in July with a powerful appeal to Kentuckians, from all walks of life, to come together to retire Mitch McConnell next year.

In interviews earlier in his campaign, Broihier drew a sharp contrast between himself and McConnell and Democratic challenger Amy McGrath, saying that when he retired from the Marines 15 years ago, he did so to farm, to work the land and become part of a community, not run for office.

“As a Kentucky farmer, educator and small-town newspaper editor, I’ve developed a greater understanding and respect for the challenges and struggles Kentucky’s working families and rural communities face than McConnell or McGrath ever have or ever will,” Broihier said.

Broihier reminded voters “When Mitch McConnell first went to Washington 35 years ago, he was one of the poorest senators. Today, he’s one of the richest. While Mitch has gotten richer and more powerful, working class Kentuckians and rural communities in Appalachia and throughout Kentucky have been ignored and left behind.”

When asked how he expects to compete with McGrath, whose campaign has raised millions of dollars nationally, Broihier replied, “I’m not the Washington Democrat’s hand-picked candidate. I led Marines on the ground for over 20 years and have the moral courage to do what is right for Kentucky and the Republic. You won’t find me trying to finesse issues or split hairs; I don’t focus group issues. I have the courage of my convictions to stand up for issues that popular opinion thinks are unpopular in the Commonwealth.”

Broihier and his wife, Lynn, also a retired Marine officer, moved to Lincoln County in 2005 when they purchased a 75-acre farm in Chicken Bristle. Together, they have raised grass-fed beef, pastured poultry, pigs and sheep. Their farm is the largest producer of all-natural asparagus in the region, supplying restaurants and farmers markets throughout central Kentucky.

There were many interesting headlines in Lincoln County that we reported on in 2019. The many topics reported on ranged... read more