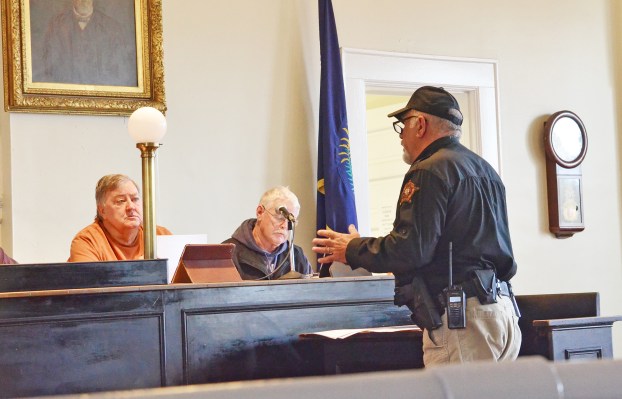 No motion was ever made by the court to approve the budget and no vote taken, with the fiscal court setting the budget aside after approving the hire of only one new sheriff’s deputy as opposed to the two requested by Sheriff Curt Folger.

Caudill had just put the budget before the court – Magistrates David Faulkner, Lonnie Pruitt, Jeff Ruckel and Joe Stanley – and explained that there was a $55,000 difference from last year to “take care of two new deputies,” when Judge Executive Jim W. Adams Jr. raised a question.

“If we approve this budget, are we approving the hiring of two deputies,” he asked County Attorney Daryl Day.

“You’re not approving who he can employ and how many people he can employ, what their names are or anything else,” Day answered. “What you are approving is the maximum amount of salaries that he can pay. I guess you could make it contingent, if you want to do it that way. But he is an elected official. You do not get to name who he hires. You do not get to say how many people he hires. What you are approving is the amount he can pay.”

To accommodate two new hires, the Sheriff’s Office had budgeted a salary cap of $490,000. That total did not include benefits.

While the remainder of the budget remained basically unchanged from last year, the increase in the salary cap prompted a serious discussion among the magistrates. Joe Stanley, Magistrate District 4, was the first to speak on the issue.

“What concerns me, and I know I’m probably the stingiest person here, is we’ve got this retirement coming up with a lot of unanswered questions for the next year or so,” he said. “Right now, our property taxes are probably as high or higher than any county around us. And, of course, we’ve got this jail issue (county looking into building new jail). It concerns me adding on these extra expenses at this time.”

The rising cost of paying into retirement and the proposed new jail were also concerns for David Faulkner, Magistrate District 1.

“What’s driving my concern is the retirement issue. We have no clue. We know that we’re going to be hit pretty hard in this next budget cycle,” he said. “And it’s no secret that we’re looking into potentially building a jail. It’s been pretty much common knowledge.”

“The fact of the matter is that that’s a great need for the county,” Faulkner continued. “We don’t want to spend $12-$14-million to build a jail but it’s not what we want but what we have to do to provide the service that we’re required by law to provide … We’ve discussed sources of revenue, streams of revenue. Revenue is going to be an issue for us. This has absolutely nothing to do with the Sheriff’s Office performance. I have great concerns about our revenue streams. I’m concerned about what we face. I know this (budget) needs to be decided pretty quickly. I just don’t know what to do. I would like to table it but we don’t have a lot of time to do that.”

Faulkner asked for input from other members of the court.

“I don’t envy Curt and them for the job they have to do with the resources they have. I thank them all for the work that they do,” said Lonnie Pruitt, Magistrate District 2. “The only thing is is we’re limited on how much money we’ve got and everybody knows it. I’d like to try to work it in the best we can to help them because we want to work with them. We don’t want to work against you.”

“People of Lincoln County have got to understand. They keep talking about not wanting to raise taxes and stay the way that we are. I think we’ve done a great job in managing what money we’ve got. It’s just taking more and more to do the job we’ve got to do. I’m with the rest of the fiscal court whatever they want to do.”

Adams explained that the county’s savings are capped (at the best they can be), but said, “Within the next couple years, we’re going to be looking into eating into our reserves … And we have less in reserve than most counties, I’ll tell you that.”

“I don’t feel comfortable stepping up to pay for two deputies,” Adams said. “If you want to move forward with one deputy, that means you’re going to accept about $60,000 plus a vehicle and those expenses from now on. It’s up to you all. If you want to go with two, you’re going to accept $130,000 thereabout and their vehicles and their expenses. I would hope that, if we do hire another deputy or two deputies, that we would decrease our comp time and our overtime costs.”

Folger said that hiring another deputy or two would help cut those costs.

‘You’ve got a choice of not doing any, doing one or doing two,” Adams said to the court. “I say, in compromising, that we hire one deputy.”

Faulkner said that he could support hiring one deputy.

“We have always tried to support the Sheriff’s Department. And this has nothing to do with politics whatsoever, but I think our Sheriff’s Department is obviously in much better condition than what it was before Curt took office. A lot of that has to do with this court because, as the judge said, we have tried to be supportive. I’m not in law enforcement. I don’t know what it takes to run the department. I think the people obviously think Curt knows what he’s doing because they put him there,” he said. “I could live with us working with one deputy. I can support that. I just can’t support $100,000-plus at this point because, if we build a new correctional facility, we’re going to have a million-dollar-a-year debt service, any way you look at it.”

“I agree with David,” Stanley said. “There’s always room for compromise and I could support that.”

“Would this be a full-time investigator, detective,” asked Jeff Ruckel, Magistrate 3. “He’d be dedicated to that?”

“I think it will be a win-win situation if we go with one,” said Pruitt.

Adams addressed Caudill, letting her know she would have to change the salary cap if the court went with one deputy.

Before a final decision or motion was made on the hiring of a deputy or two, the court revisited the jail issue

“I don’t think a lot of people realize it. What we’re paying right now is going to run over $400,000 (approximately),” said Pruitt. “If we don’t build the jail and we send our prisoners somewhere’s else, not only are we going to lose the revenue of the people working in our county, but we’re going to pay somewhere around $700,000 for the rest of our lives. So, it’s not a fact of whether we’re building a jail because we have to. It’s going to be the best thing for the people of Lincoln County if we have a place to keep our prisoners and also keep people working in our county.”

As County Attorney, Daryl Day cannot cast a vote for or against a new jail but he is adamant about the need for a new facility.

“I don’t have a vote in this either way, but the biggest liability the county faces right now is right there,” Day said pointing to the jail. “We are one person getting injured over there from having Curt as the only deputy patrolling this county, because what we would end up having to pay out from a lawsuit from that will negate a lot of stuff that’s in this budget right now and that ain’t getting no better. There’s no way to make that building any better.”

“We’ve talked about this for 13 years. That (jail) is a car with no brakes on it and we’re heading down hill. And you know what’s sitting at the bottom of that hill? A busload of school kids. That’s exactly the position we’re in from a liability standpoint with that. We can’t stop halfway down the hill and fix the brakes on that building. Eventually we’ve got to send those inmates someplace else, which is going to cost from $600,000 to $700,000. We’d be at the mercy of another county and what they want to charge us. Or we’ve got to build a new jail. That’s  20 years of a million-a-year and 30 or 40 years after that without a million. That’s a decision they have to make. It’s a hard decision. It may result in a tax increase.”

Day commended the magistrates for taking on a job most people don’t want and doing the best they can. “Honestly, in 13 years, they’ve done a great job with the budget. The jail has done a great job in saving us money. Everybody’s cut some corners and took some things away when they didn’t want to. From my standpoint, that building is the biggest liability and it will continue to be that way until it is closed.”

Faulkner noted that the law says the court is responsible for the people.

“I don’t want this to be a jail issue because that’s not why you’re here,” Faulkner said to Folger and Caudill. “But it is the most pressing issue we have. I just want to make sure you understand the pressure that we have on us as a court to deal with that situation.”

Adams lamented the timing of the budget, noting that the Sheriff’s Office works on a calendar year (starting in January) while the court is on a fiscal year (beginning in June).

“It’s not fair that our budget does not coincide with the sheriff’s or the clerk’s budget,” he said. “It’s hard for us to sit here mid-year … You don’t really have a handle on how you’re trending as your spending and revenues go until the third quarter, which is just starting to happen. I would feel very uncomfortable with doing two deputies. I’m still uncomfortable with one but, if that’s the pleasure of the court, I’ll make that work.”

Adams said to Folger that, “You can start banging the drum again in April or May when we’re sitting down with …. trying to decide what we’re looking at next year. By then, we’re going to have a decision on our jail. I don’t want to leave this court and leave that decision for the next court because it’s going to be a tough one. As Lonnie said, it’s going to take a tax increase. I’m sorry, that’s a bad word in today’s climate, but it’s going to have to happen.”

Faulkner made a motion to increase the Sheriff’s Department by one deputy – detective – with a salary cap of $426,500. The motion passed 4-0.

STANFORD — The doors to McKinney Elementary School were closed at the end of the 2018-19 school year and, in... read more