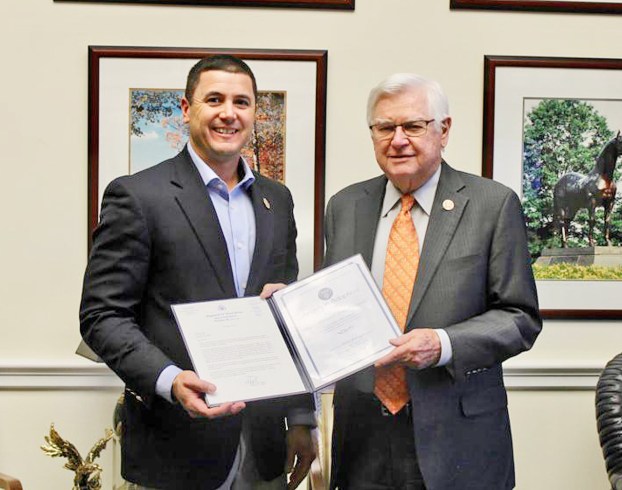 STATE REPRESENTATIVE David Meade, left, was nominated as one of the nation’s Angels in Adoption by Congressman Hal Rogers, right. Meade’s nomination was recognized at a program in Washington, D.C.

State Rep. David Meade nominated as an Angel in Adoption

WASHINGTON, D.C — Kentucky State Representative David Meade was recognized on Thursday in Washington, DC as one of the nation’s Angels in Adoption.

Meade was nominated for the award by Congressman Hal Rogers (KY-05), in recognition of his efforts to reform foster care and adoption in Kentucky over the last six years.

The Congressional Coalition on Adoption Institute hosted the 21st annual Angels in Adoption Reception and Gala in Washington, DC on November 14 where Meade received an Angel Pin and an award certificate.

“David’s fierce determination to help the nearly 9,000 children in Kentucky’s foster care system is inspiring, and worthy of national recognition. He spearheaded Kentucky’s monumental Adoption and Foster Care Reform legislation in 2018, as well as the Meade’s Foster Child Bill of Rights earlier this year, providing more protections for our children,” said Congressman Rogers. “It is his passion and determination that has catapulted Kentucky as a national leader in adoption and foster care reform.”

In addition to his work in the state legislature, Meade and his wife are also adoptive parents.

“It was a tremendous honor to join so many other people across the country today, who are also working to help children across the country who are in foster care and in need of a family. The need is great and it is vital that we continue to give a voice to those who have been silenced for too long,” said Meade. “I’m grateful for Congressman Rogers’ nomination and it is always a pleasure to work with him to help our youngest citizens.”