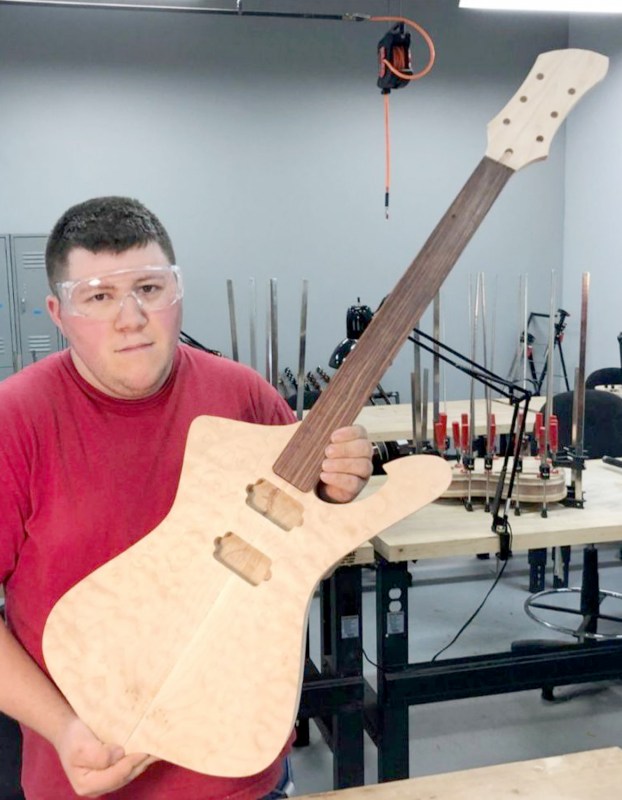 BRANDON EDWARDS holds the guitar he is currently building in the Electric Craft course at the Guitar Craft Academy.

Brandon Edwards grew up in Stanford, Kentucky – just down the road from Montgomery Gentry‘s Eddie Montgomery, a Danville native – so it’s fair to say that music’s always been part of his life.

“I got fascinated with Les Pauls – seeing how you could move a whole audience with a guitar, and it always fascinated me that it starts as something I can build with my hands,” he says.

After discovering Guitar Craft Academy Nashville on the internet, Edwards, 21, knew the path he wanted his career to take. He’s now in the Electric Craft course and plans to continue in the Acoustic Craft course this fall. He’s currently building a guitar inspired by his dad’s love of KISS – an Ibanez Iceman lookalike similar to the model played by Paul Stanley for many years.

“It’s an intricate body design, and the guitar is beautiful,” he says. “You can build a guitar and it’ll last a lifetime.”

His favorite part of Guitar Craft Academy’s program, he says, is getting to learn from seasoned professionals like Brian Nutter, formerly a guitarist for Keith Urban. He hopes to apply his knowledge working in Nashville after his graduation.

“Having somebody who’s been there on the road, showing you what they learned, showing us their techniques and how they make life easier – it’s insane,” he says.

Edwards is the son of Dale and Kathy Edwards of Stanford.

STANFORD — Stanford residents will now have to think twice before burning debris or trash in their yards. Tuesday, Stanford... read more