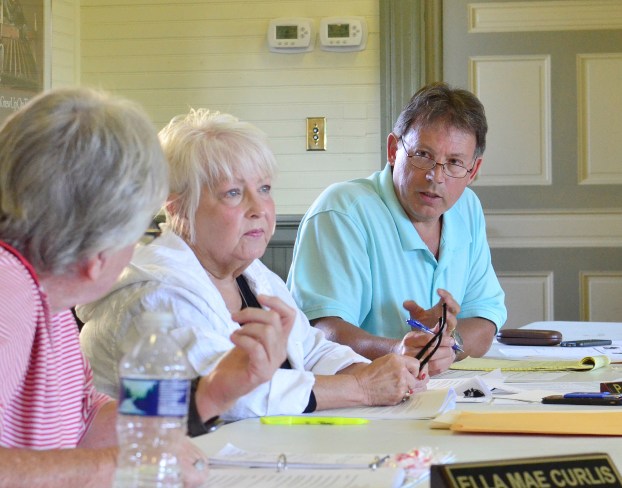 STANFORD — The Stanford City Council approved a real and personal property tax rate of .136 (13.6 cents) per $100 of assessed value at Thursday’s public hearing at the L & N Depot.

The second reading of the ordinance setting real and personal property tax rates for the year was approved by a vote of 6-0.

Before the vote, Mayor Scottie Ernst asked for citizens’ questions and comments on the proposed tax rates. He got one response.

“How much is the average person in Stanford going to have to pay more?” asked Stanford resident Larry Nunemaker.

When the council responded “none,” Nunemaker said, “That’s what I wanted to know.”

When it came to council members comments on the proposed tax rates, Ronnie Deatherage quickly took the floor.

“Normally, that’s what it is (same),” Ernst responded.

“Normally. But it hasn’t been,” answered Deatherage. “Are we in need of money, I guess is my question, so much that we have to raise that up to match the other? Is that the only reason is to bring it up to 13.6 cents?”

After Ernst explained that it was suggested by the Kentucky League of Cities that cities adopt the same rate for both real and personal property, Deatherage continued with his query.

“Suggested, but do we need the money?” he asked. “I’ve been promising people when we were campaigning, not to raise taxes unless we need to. And, Scottie, you know about making promises. You go out and make promises, you’ve got to keep them unless it isn’t realistic.”

“My problem is is that every time you turn around somebody’s putting a tax on something. Pretty soon nobody’s going to have anything other than paying taxes. School board is going to raise taxes. County is raising taxes – and we got the blame for that.”

“It’s in the paper,” Deatherage and fellow council member Peggy Hester answered in unison, referring to a quote from Magistrate David Faulkner from the Sept. 5 issue of The Interior Journal concerning the Lincoln County Fisacl Court’s raising real and property tax rates.

Deatherage explained Faulkner gave the dispute over the collection of 911 fees “as a justification for raising taxes.”

“… the City of Stanford, the Water Board decided at the last minute to appeal the last ruling,” Deatherage began reading the quote,” so we’re right back at the starting point again of waiting on the courts for … there’s no way of knowing. It could be another two years. So we are potentially looking at having to dump that general fund money back into the 911 Center or back to support 911. The tax rate that we’re proposing doesn’t come close to covering that additional demand on our revenue. It’s a fraction of what we’re going to have to put out so, thanks to some of the other local government entities, we’re back in the hole again. So it is a necessity, in my opinion, for us to do this.”

Faulkner’s comments did not sit well with Miller.

“Wasn’t we told that they did not contribute to anything?” asked council member Ella Mae Curlis.

“That’s what we were told,” confirmed Miller.

“We owe them money because we did not participate in helping pay bills,” Curlis said.

“If I’m not mistaken, we’re 26 percent of the population and we pay 25.3 percent of county tax,” said Miller. “So we’re off .7 of 1 percent between what we pay and what our population is. So, the magistrates can sit down there and say what they want. I want them to show me where they spend the $1.7-million they collect from the residents of the city for property tax.”

Curlis, a former member of the Water Board, shared her knowledge of the subject of the collection of 911 fees.

“What people don’t understand and what people don’t read in the paper is there was an agreement 2-½ years ago when I was on the Water Board to collect this (911 fee) and the county backed out and didn’t even notify anybody,” she said. “But now, all of a sudden, they write an ordinance to demand … the Water Company never once told anyone that they would not collect this. But they demanded. Well, any Kentucky League of City meeting that you go to what’s the first thing they say – ‘The counties cannot tell the cities what to do.’ Is that not what they say Dr. James?”

“Yes, that’s true,” answered James. “I don’t know all the details on what happened there. I think it’s disappointing that we never can work this out inter-locally.”

“But there was an agreement years ago,” said Curlis. “The county says they have to raise the taxes to pay for the difference. The Water Board is collecting it right now.”

“But don’t blame us for the problems.”

Miller made the motion for a second reading of the ordinance to set the rates for 2019 and Dr. James seconded the motion. In a roll call vote, council members Sara Givens, Curlis, Deatherage, Hester, James and Miller all voted yes.

At its regular meeting, which followed the public hearing, the council passed three ordinances, repealed another and vetoed a fifth. (Complete ordinances are posted in the legal section)

The first ordinance on the agenda dealt with regulating the number, length and conditions of a yard sale within the Stanford city limits. The purpose of the ordinance is to control and restrict yard sales in order to protect the public health, safety and in order to maintain integrity of neighborhoods.

In the Ordinance #220.19, it is unlawful for any one person at one address to hold more than four yard sales within one calendar year. And the duration of the sales cannot last more than three consecutive days.

Those holding yard sales will still have to obtain a permit for a two-day or three-day limit but the permits are now free.

The Ordinance #310.02, which establishes the guidelines for smoke detectors, is to ensure that the City of Stanford’s safety codes and procedures are current and to ensure that all buildings are built and maintained to the appropriate standards of safety.

Ordinance #310.03 establishes the guidelines for fireworks. It states that the City of Stanford shall be responsible for the enforcement of the laws of the Commonwealth of Kentucky regulating firework sales in the city limits.

When it comes to the discharge of fireworks in the city, persons must be 18 years of age or older to discharge, use, ignite, fire or explode those consumer fireworks authorized by KRS 227.702(2) and (3). Fireworks may be discharged or used between the hours of noon and 10 p.m. June 28 – July 3 and on July 5. On July 4, fireworks, including consumer fireworks, may be discharged or used between noon and 12:30 a.m. Fireworks may also be discharged between 11:30 p.m. and 12:30 a.m. on New Year’s Eve/Day and within two hours of any major Kentucky state university winning a national championship.

The final ordinance, which was for changing the City of Stanford’s regular meeting location and date, failed.

Ordinance #211.1 would have changed the location from the Historic L & N Depot to the Lincoln County Public Library with the date changed from the first Thursday evening of the month to the second Thursday of the month.

The second reading for the ordinance failed by a vote of 0-6, with the council choosing to look into the costs of improving the Depot to accommodate the council’s and citizen’s technology needs.

The Equestrian Life: Adalee Ladwig is riding love of horses to national championships

To say that 16-year-old Adalee Ladwig loves horses would be an understatement. Adalee has been around horses since she was... read more